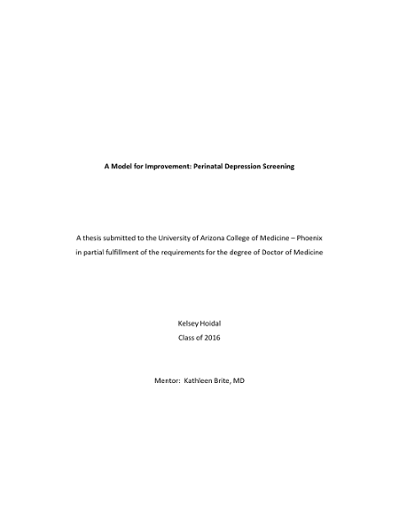 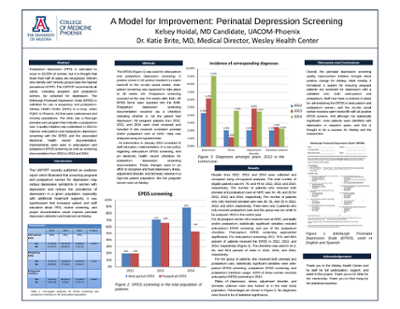 It is estimated that postpartum depression (PPD) occurs in 10‐20% of women, but fewer than half of cases are recognized.1 CDC survey data form 2004‐2008 utilizing the Pregnancy Risk Assessment Monitoring System (PRAMS) found that young mothers who identify with minority groups have the highest prevalence of PPD.3 Routine screening for PPD with a validated instrument, the Edinburgh Postnatal Depression Scale (EPDS), increased the rate of diagnosis of PPD nearly three times, according to one study.10 PPD screening can detect and mitigate depressive behavior and positively impact the lives of mothers and their children.7,8 In fact, the USPSTF recently published an evidence report which illustrated that screening pregnant and postpartum women for depression may reduce depressive symptoms in women with depression and reduce the prevalence of depression in a given population, especially with additional treatment supports.11 It is a B recommendation to screen the general adult population, including pregnant and postpartum women, for depression. The Wesley Health Center, a busy, urban family medicine FQHC in downtown Phoenix, Arizona has a thorough prenatal care program that includes a postpartum visit. Numbers from 2011 indicate about 25% of the women who participated in the program returned to Wesley for their postpartum care. The postpartum visit includes a PPD screening using the EPDS, which is also well‐established for use prior to birth.10 It is hypothesized that increased patient education about PPD, increased vigilance about postpartum visit scheduling, and routine depression screening using the EPDS at 28 weeks gestational age and at the postpartum visit will improve PPD detection and treatment at Wesley. An intervention was performed in January 2013. It consisted of staff education about PPD and the EPDS, a new policy that all prenatal care patients receive the EPDS around 28 weeks gestation in addition to the postpartum visit, and an EMR checkbox indicating postpartum depression screening was performed and whether or not the patient is experiencing PPD. Screening rates between years were compared using chi‐squared testing. Patients were assigned to groups based on whether they received only prenatal care, only postpartum care, or both prenatal and postpartum care. Between the three data years, 2012 is the control year, 2013 is the year immediately after intervention, and 2014 is assessed for sustainability. There was a statistically significant difference in EPDS screening prior to birth in women who received both prenatal and postpartum care at WHC. For ante‐partum screening, 26.5 percent of women had the EPDS in 2012 versus 79.2 percent and 100 percent in 2013 and 2014, respectively. Postpartum screening was also found to be statistically significant between the years—26.5 percent, 66.7 percent, and 55.2 percent for 2012, 2013, and 2014, respectively. Although not statistically significant, there was a small increase in number of patients identified with depression in the group of women who received the EPDS prior to giving birth—an increase from 1 to 5 and 4 cases identified in 2012 versus 2013 and 2014, respectively. It was clear that increased staff education, a formalized screening system, and ante‐partum depression screening aid a busy, urban FQHC in addressing perinatal depression by identifying women at risk and offering treatment.