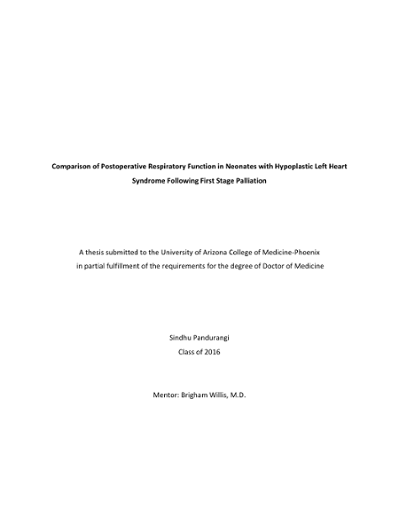 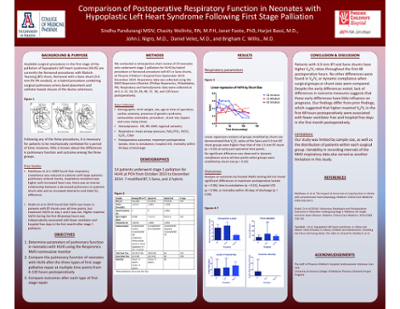 Purpose Available surgical procedures in the first stage of the palliation of hypoplastic left heart syndrome (HLHS) are currently the Norwood procedure with Blalock‐Taussing (BT) shunt, Norwood with a Sano shunt (5.0 mm right ventricular‐pulmonary artery conduit), or a hybrid procedure combining surgical pulmonary artery band placement and catheter‐based closure of the ductus arteriosus. Following any of the three procedures, it is necessary for patients to be mechanically ventilated for a period of time; however, little is known about the differences in pulmonary function and outcome among the three groups. Methods We conducted a retrospective chart review of 14 neonates who underwent stage 1 palliation for HLHS, by hybrid procedure or Norwood procedure with BT or Sano shunts, at Phoenix Children’s Hospital from September 2013‐December 2014. Demographic, hemodynamic, and outcome information was collected. Heart rate, respiratory rate, mean arterial pressure, end tidal carbon dioxide (ETCO2), cerebral and renal somatic oximetry, mean airway pressure, ratio of partial pressure of arterial oxygen to inspired oxygen (PaO2/FiO2), partial pressure of arterial carbon dioxide (PaCO2), dead space fraction (Vd/Vt), and dynamic compliance were measured preoperatively, postoperatively, and at multiple time points from 6 to 120 hours postoperatively. Respiratory data was collected using the NM3 monitor (Philips Respironics, Pittsburgh, PA). Outcome measures collected included maximum postoperative lactate, time to extubation, hospital length of stay, and mortality. Results Of the 14 patients, 7 received the Norwood with BT shunt, 5 received the Sano shunt, and 2 received the hybrid procedure. Through linear regression analysis of groups stratified by shunt size, we found that the Vd/Vt ratios of the Sano and 3.0 mm BT shunt groups were higher at earlier times points, but became indistinguishable by 48 hours postoperatively (p=0.02). Linear regression of the 3 surgical groups comparing Vd/Vt across all times points did not show any significant differences (p = 0.79). Linear regression of dynamic compliance among the three groups across all time points also was not significant (p = 0.72). No significant difference was observed in dynamic compliance across all time points when groups were stratified by shunt size (p = 0.33). Examining differences between BT and Sano groups at each time point from 0‐ 120 hours postoperatively using Mann Whitney U analysis did not reveal significance. Analysis of outcomes of length of mechanical ventilation (p=0.61), hospital length of stay (p =0.99), and mortality (p>0.99) also did not differ significantly among the 3 surgical groups. Conclusion Our study identified that the 3.0 mm BT and Sano shunt group had higher Vd/Vt ratios throughout the first 48 postoperative hours. No other differences were found in Vd/Vt or dynamic compliance when surgical groups or shunt sizes were compared. Despite the early differences noted, lack of differences in outcome measures suggests that these early differences have little influence on prognosis.