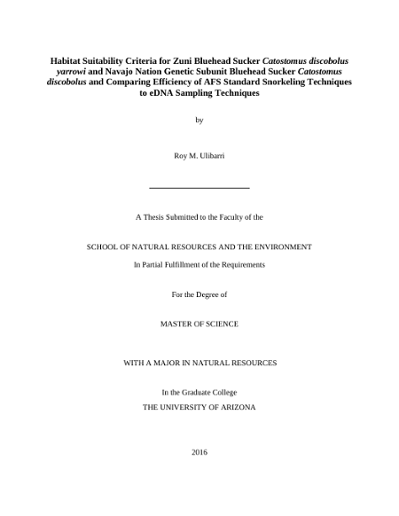 I quantified habitat selection for the endangered Zuni Bluehead Sucker Catostomus discobolus yarrowi and the Navajo Nation Genetic Subunit (NNGS) Bluehead Sucker Catostomus discobolus - a recent taxon described from genetic information. Both taxa are found in northern Arizona and New Mexico border regions. I examined fish [≥50 millimeters (mm) total length (TL)] selection of microhabitat conditions (i.e., water velocity, substrate size, overhead cover, water depth, instream cover, and mesohabitat conditions [i.e., pool, run riffle], during summer base flow conditions for NNGS Bluehead Suckers, and during both summer base flow and high spring flow conditions for Zuni Bluehead Suckers in six streams). Electrofishing, seining, and snorkeling were used to evaluate fish occupancy. From this information, I developed stream specific habitat suitability criteria (HSC) and then generalized HSC for each taxon, and tested transferability of the generalized HSC to individual streams. Zuni Bluehead Suckers and NNGS Bluehead Suckers occupied similar habitats: low velocity pools; sand, silt, and pebble substrate; high percent of instream cover; and water temperatures ranging from 2-21°C. However, Zuni Bluehead Suckers selected for low (0-25%) overhead cover where as NNGS Bluehead Sucker selected for high (0-75%) overhead cover. This was likely due to the source of instream cover–aquatic macrophytes that required sunlight in the Zuni Bluehead Sucker streams, and large woody debris falling from overhead branches in the NNGS Bluehead Sucker streams. Suggestions for managers includes maintaining existing cover or artificially construct additional instream cover; promote overhead cover (e.g., maintaining large trees along streams) and pool mesohabitats. In addition to this work I also tested the new method of environmental DNA (eDNA) to further help conservation efforts for these taxa. Environmental DNA has typically been used to detect invasive species in aquatic environments through water samples. I compared the efficacy of eDNA methodology to American Fisheries Society standard snorkeling surveys to detect presence of a rare fish species. My study site included three streams on the Navajo Nation in northern Arizona and northern New Mexico containing Navajo Nation Genetic Subunit Bluehead Sucker Catostomus discobolus and the Zuni Bluehead Sucker Catostomus discobolus yarrowi. To determine sample sites, I first divided entire wetted area of streams into 100-m consecutive reaches. I systematically selected 10 of those reaches for snorkel and eDNA surveys. Water samples were taken in 10-m sections within each 100-m reach, and fish presence via snorkeling was noted in each 10-m section as well. Water samples were collected at the downstream starting point of each reach, and continued upstream in each section 5 to 8 m ahead of the snorkeler. A qPCR was run on each individual water sample in quadruplicate to test for sucker presence or absence. I was able to positively detect both species with eDNA sampling techniques in two out of three streams. Snorkeling resulted in positive detections of both species in all three streams. In streams where fish were detected with eDNA sampling, snorkeling detected fishes at 11-29 sites per stream, where as eDNA detected fish at 3-12 sites per streams. My results suggested that AFS standard snorkeling was more effective at detecting target fish species than eDNA. To improve eDNA sampling, the amount of water collected and tested should be increased. Additionally, filtering water on site may improve eDNA techniques for detecting fish. Future research should focus on standardizing eDNA sampling to provide a widely operational sampling tool similar to electrofishing, netting, and hydroacoustics.