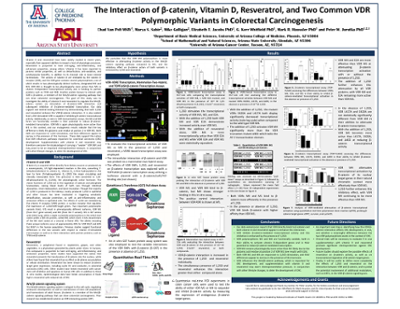 Vitamin D and resveratrol have been widely researched in recent years, especially their apparent abilities to impact a host of physiological processes. Resveratrol, a phytoalexin found in various berries, peanuts, and other vegetables, is purported to possess anti-aging, anti-inflammatory, antioxidant, anticancer, neuroprotective, and antiarthritic properties, while the classical endocrine functions of vitamin D are the control of calcium and phosphate homeostasis. The biologically active metabolite of vitamin D, 1,25-dihydroxyvitamin D (1,25D), is typically synthesized in the kidney, bound to vitamin D binding protein, and shuttled to cellular target sites. Mounting data on the effect of locally synthesized 1,25D in immune, epithelial, neural, and other tissues have led to an increased awareness of the myriad functions of vitamin D, including detoxification, cellular aging and its modulation, immune regulation, neurotransmitter activity, and metabolic control. Both endocrine and intracrine actions of vitamin D are mediated by the vitamin D receptor (VDR), a nuclear receptor that controls vitamin D-directed transcription of target genes. Importantly, the VDR has numerous polymorphisms, one of which results in two phenotypically distinct isoforms, designated M1 and M4. VDR M4 is postulated to be more active than M1 in vitamin D-dependent transactivation. Variable binding affinities between the two isoforms and VDR interacting proteins such as TFIIB and RXR have also been observed. Another protein known to interact with VDR is β-catenin, the mediator of the Wnt/β-catenin signaling pathway that can drive colorectal carcinogenesis. The goal of this study was to investigate the ability of vitamin D and resveratrol to regulate the Wnt/β-catenin system via stimulation of β-catenin-VDR (both M1 and M4) interaction and subsequent inhibition of β-catenin-mediated transcription. The current data reported herein support and extend previous work by demonstrating that VDR binds directly to β-catenin and that both vitamin D and resveratrol appear to enhance this interaction. We also present data that 1,25D-stimulated VDR is capable of inhibiting β-catenin transcriptional activity. Significantly, we have shown that the two common VDR polymorphisms M1 and M4, are functionally variable, both in their induction of vitamin D-dependent genes and in their inhibition of β-catenin-mediated transcription. VDR M4 exhibits both elevated transactivation and amplified capacity for β-catenin suppression compared to M1, and studies employing site-directed mutagenesis of VDR implicate the glutamic acid at position 2 as being responsible for the reduced activity of the M1 variant. Both polymorphic VDR variants display 1,25D-mediated enhancement of -catenin association, with the M1 SNP possessing a lower basal (-1,25D) binding to this protein partner but a higher fold stimulation in -catenin interaction in the presence of 1,25D. Taken together, these data support the notions that VDR influences pathways important for colorectal carcinoma (CRC) development, and that supplementation with vitamin D and resveratrol may reduce colon cancer risk in the general population, especially in individuals with the less active M1 VDR polymorphism. A comprehensive understanding of 1,25D and resveratrol action in VDR signaling may allow for a more personalized approach toward treating vitamin D–related disorders and evaluating risk for carcinogenesis.