From Irrigation Engineers to Victims of Type 2 Diabetes: Connecting Natural Resource Conditions with Type 2 Diabetes in the Pima Indians of the Gila River Reservation 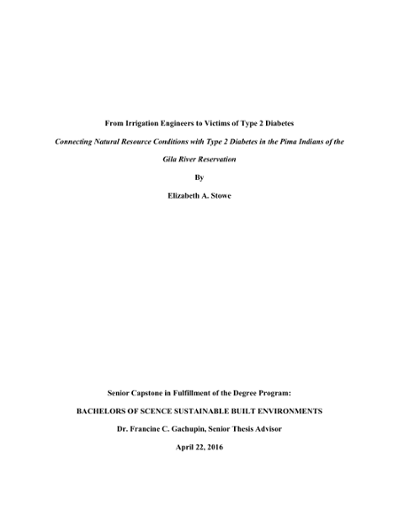 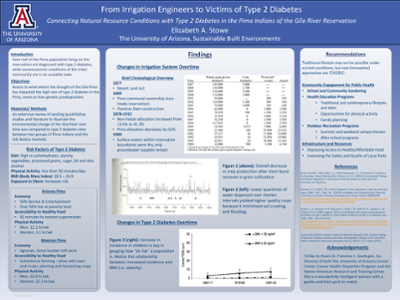 Copyright © is held by the author. Digital access to this material is made possible by the College of Architecture, Planning and Landscape Architecture, and the University Libraries, University of Arizona. Further transmission, reproduction or presentation (such as public display or performance) of protected items is prohibited except with permission of the author.

This item is part of the Sustainable Built Environments collection. For more information, contact http://sbe.arizona.edu.

For over a century, Pima Indians living just south of Phoenix, Arizona on the Gila River Indian Reservation have suffered from an epidemic of type 2 Diabetes Mellitus. Over half of the Pima population living on the reservation is diagnosed with diabetes while the socioeconomic conditions of the tribal community are in an unstable and dilapidated state (Unnatural Causes 2008). Fifty percent of the Pimas living on the Gila River Indian Community live below the poverty level (Unnatural Causes 2008). Displacement from traditional customs and neglect from the U.S. federal government are just some of the detrimental impacts the people have faced over the last century (Unnatural Causes 2008). The discussions within this paper will attempt to address how and why the Pima Indians have experienced such severe changes in lifestyle and economy over the last century and what affect this has had on the physical health of the people in the community. By addressing these overarching issues, one should find that socioeconomics and conditions of physical health are strongly connected. Looking even closer though, specifically at the epidemic of type 2 diabetes and the contributing risk factors that this population suffers from, one will begin to question how within just a matter of 3 decades the number of diagnosed cases of type 2 diabetes doubled among the Pima and how the rates are some of the highest recorded in the entire world. Moreover, the underlying issue is not simply a cause of poor diet, change in activity levels and unfavorable genetics, rather - being robbed of a critical natural resource, forced to adapt to unfavorable economic changes and in the end, the U.S. government failure to intervene – are truly the underlying causes that have impacted the health of the Pima Indians of Southern Arizona. The Pimas are people of their natural environment. Having a long history of living along the Gila River, the Pima were water irrigation engineers (Unnatural Causes 2008). Cultivating local crops, living off the land and providing for themselves using waters of the Gila River in an arid climate is as much a part of their culture as is their ancestral bloodline. The research presented in these discussions will look at the identical ancestry of Pima Indians living in Southwestern Sonora, Mexico in the Sierra Madre Mountains of Maycoba in order to evaluate the Pima tribe’s predisposition to the disease. The significance of looking at these groups is that their genetic history is the same based upon linguistic and genealogy studies (Schulz, Bennett, Ravussin, Kidd, Kidd, Esparza, Valencia, 2006). However, the Pima living in Sonora have not seen the same ever-increasing rates of type 2 diabetes or even obesity, as their northern counterparts have. Notably, the Mexican Pima have not experienced the same environmental changes (i.e. drought) either. Subsequently, the Pima of Sonora have been able to continue their traditional ways of life including subsistence farming and healthy diet and exercise. A historical background of the Arizona Pimas will be provided, from their cultural traditions as irrigation engineers to their participation in federal subsidy programs and their current economic state. In-depth historical accounts will also be made for the history of water law in the Southwestern United States, including what drove white settlers’ demand for water west of the Mississippi over the course of two centuries, to the attempts to mitigate the severity of drought on Native American reservations through multiple legislative acts. Information regarding the Mexican Pima’s current economy, levels of physical activity and typical diet will be presented in comparison to the present health and economic conditions of the Arizona Pima.