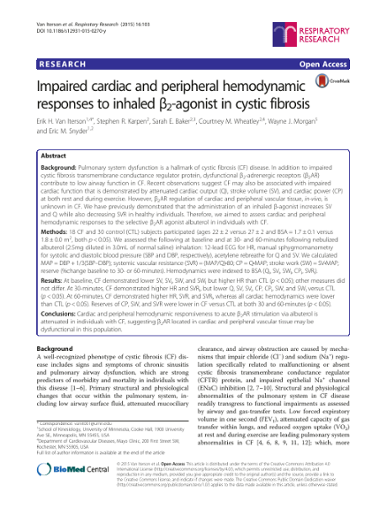 This item is part of the UA Faculty Publications collection. For more information this item or other items in the UA Campus Repository, contact the University of Arizona Libraries at repository@u.library.arizona.edu.

BACKGROUND: Pulmonary system dysfunction is a hallmark of cystic fibrosis (CF) disease. In addition to impaired cystic fibrosis transmembrane conductance regulator protein, dysfunctional β2-adrenergic receptors (β2AR) contribute to low airway function in CF. Recent observations suggest CF may also be associated with impaired cardiac function that is demonstrated by attenuated cardiac output (Q), stroke volume (SV), and cardiac power (CP) at both rest and during exercise. However, β2AR regulation of cardiac and peripheral vascular tissue, in-vivo, is unknown in CF. We have previously demonstrated that the administration of an inhaled β-agonist increases SV and Q while also decreasing SVR in healthy individuals. Therefore, we aimed to assess cardiac and peripheral hemodynamic responses to the selective β2AR agonist albuterol in individuals with CF. METHODS: 18 CF and 30 control (CTL) subjects participated (ages 22 ± 2 versus 27 ± 2 and BSA = 1.7 ± 0.1 versus 1.8 ± 0.0 m2, both p < 0.05). We assessed the following at baseline and at 30- and 60-minutes following nebulized albuterol (2.5mg diluted in 3.0mL of normal saline) inhalation: 12-lead ECG for HR, manual sphygmomanometry for systolic and diastolic blood pressure (SBP and DBP, respectively), acetylene rebreathe for Q and SV. We calculated MAP = DBP + 1/3(SBP-DBP); systemic vascular resistance (SVR) = (MAP/Q)•80; CP = Q•MAP; stroke work (SW) = SV•MAP; reserve (%change baseline to 30- or 60-minutes). Hemodynamics were indexed to BSA (QI, SVI, SWI, CPI, SVRI). RESULTS: At baseline, CF demonstrated lower SV, SVI, SW, and SWI but higher HR than CTL (p < 0.05); other measures did not differ. At 30-minutes, CF demonstrated higher HR and SVRI, but lower Q, SV, SVI, CP, CPI, SW, and SWI versus CTL (p < 0.05). At 60-minutes, CF demonstrated higher HR, SVR, and SVRI, whereas all cardiac hemodynamics were lower than CTL (p < 0.05). Reserves of CP, SW, and SVR were lower in CF versus CTL at both 30 and 60-minutes (p < 0.05). CONCLUSIONS: Cardiac and peripheral hemodynamic responsiveness to acute β2AR stimulation via albuterol is attenuated in individuals with CF, suggesting β2AR located in cardiac and peripheral vascular tissue may be dysfunctional in this population.