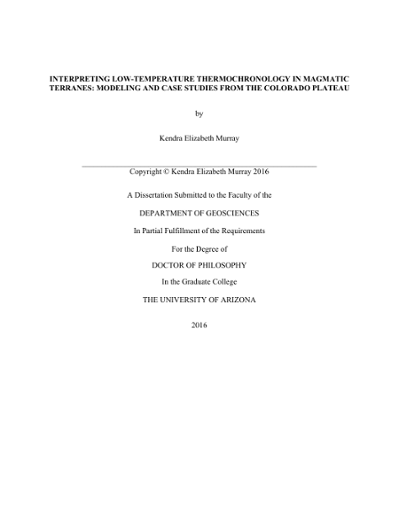 Robust interpretations of rock thermal histories are critical for resolving the timing and rates of geologic processes, especially as low-temperature thermochronology has become a common tool for investigating the evolution of landscapes and mountain belts and the feedbacks between geodynamic processes. Most interpretations of thermochronologic cooling ages, however, attribute rock cooling entirely to rock exhumation - a common but tenuous assumption in many settings where thermochronology is used to investigate links between tectonics, climate, and landscape evolution, because these places often have history of magmatism. Exploring the complexities - and advantages - of interpreting low-temperature thermochronologic data in magmatic terranes is the principal theme of this work. Using simple analytical approximations as well as the finite-element code Pecube, we characterize the cooling age patterns inside and around plutons emplaced at upper and middle crustal levels and identify the advective and conductive scaling relationships that govern these patterns. We find that the resetting aureole width, the difference between reset and unreset cooling ages in country rocks, and the lag time between pluton crystallization age and pluton cooling age all scale with exhumation rate because this rate sets the advective timescale of cooling. Cooling age-elevation relationships in these steadily exhuming models have changes in slope that would masquerade as changes in exhumation or erosion rates in real datasets, if the thermal effects of the plutons were not accounted for. This is the case both in the country rocks immediately next to upper crustal plutons and, surprisingly, in the country rocks kilometers above mid-crustal plutons with no surface expression. Together with a lag-time analysis useful for the practical question of when it is appropriate to interpret a cooling age as an exhumation rate in crystalline rocks, this work improves our framework for evaluating the effects of magmatism on thermochronologic datasets. We also demonstrate the importance of considering the magmatic history of a region in field studies of the Colorado Plateau, where interpreting apatite (U-Th)/He data requires diagnosing significant inter- and intra-sample age variability. Prior to considering the thermal history of the region, we develop a new model for a common source of this age variability: excess He implantation from U and Th (i.e., eU) hosted in secondary grain boundary phases (GBPs), which can make very low eU apatites hundreds of percent 'too old'. Samples significantly affected by He implantation are not useful for thermal history interpretations, but this model does provide a diagnostic tool for discriminating these samples from those with useful age trends. Once the effects of GBPs have been accounted for, the remaining data from two different thermochronologic archives in the central Colorado Plateau provide a new perspective on the Cenozoic history of the region, which has a multiphase - and enigmatic - history of magmatism and erosion. We find that sandstones in the thermal aureoles around the Henry, La Sal, and Abajo mountains intrusive complexes were usefully primed by magmatic heating in the Oligocene to document the subsequent late Cenozoic history of the region more clearly than any other thermochronologic archive on the Plateau. These data document a stable Miocene landscape (erosion rates<30 m/Ma) that rapidly exhumed ~1.5-2 km in the Plio-Pleistocene (~250-700 m/Ma no earlier than 5 Ma) in the Henry and Abajo mountains, and strongly suggest most of this erosion occurred in the last 3-2 Ma. The integration of the Colorado River ca. 6 Ma, which dropped regional base-level, is the principal driver of this erosion. It is likely, however, that a component of the rapid Pleistocene rock cooling is unique to the high mountains of the Colorado Plateau and reflects an increase in spring snow-melt discharge during glacial periods. Although apatite thermochronology results far from the Oligocene intrusive complexes cannot resolve this detailed Plio-Pleistocene history, they do constrain the onset of late Cenozoic erosion to no earlier than ~6 Ma. Moreover, apatite cooling ages from these rocks also document Oligocene cooling (ca. 25 Ma) that is contemporaneous with the emplacement of the laccoliths and the waning of the vigorous magmatic flare-up that swept through the southwestern USA ca. 40-25 Ma. Although the cooling ages are consistent with ~1 km of exhumation in the late Oligocene and early Miocene, as previous workers have suggested in the eastern Grand Canyon region, we demonstrate that a transient change in the geothermal gradient (peaking at ~50˚C/Ma in the late Oligocene) driven by moderate mid-crustal magmatism can produce identical age patterns. Therefore, we re-interpret the mid-Cenozoic erosion event on the Colorado Plateau as primarily a change in the crustal thermal field, rather than an erosional event. This requires a more significant Laramide-age unroofing in parts of the central Plateau and perhaps a re-evaluation of the interpretations of Oligocene canyon cutting in the Grand Canyon region