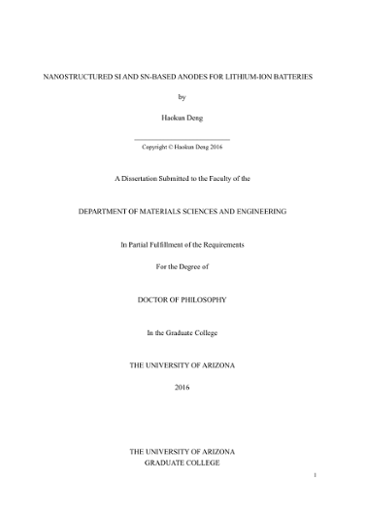 Lithium-ion batteries (LIBs) are receiving significant attention from both academia and industry as one of the most promising energy storage and conservation devices due to their high energy density and excellent safety. Graphite, the most widely used anode material, with limitations on energy density, can no longer satisfy the requirements proposed by new applications. Therefore, further improvement on the electrochemical performance of anodes has been long pursued, along with the development of new anode materials. Among potential candidates, Si and Sn based anodes are believed to be the most promising. However, the dramatic volume expansion upon Li-intercalation and contraction upon Li de-intercalation cause mechanical instability, and thus cracking of the electrodes. To overcome this issue, many strategies have been explored. Among them the most efficient strategies include introduction of a nanostructure, coupled with a buffering matrix and coating with a protective film. However, although cycling life has been significantly increased using these three strategies, the capacity retention still needs improvement, especially over extensive charge-discharge cycles. In addition, more efforts are still needed to develop new fabrication methods with low costs and high efficiency. To further improve mechanical stability of electrodes, understanding of the failure mechanisms, particularly, the failure mechanisms of Si and Sn nanomaterials is essential. Therefore, some of the key factors including materials fabrication and microstructural changes during cycling are studied in this work. Hollow Si nanospheres have proved to be have a superior electrochemical performance when applied as anode materials. However, most of fabrication methods either involve use of processing methods with low throughput, or expensive temporary templates, which severely prohibits large-scale use of hollow Si spheres. This work designed a new template-free chemical synthesis method with high throughput and simple procedures to fabricate Si hollow spheres with a nanoporous surface. The characterization results showed good crystallinity and a uniform hollow sphere structure. The substructure of pores on the surface provides pathways for electrolyte diffusion and can alleviate the damage by the volume expansion during lithiation. The success of this synthesis method provides valuable inspiration for developing industrial manufacturing method of hollow Si spheres.3D graphene is the most promising matrix that can provide the necessary mechanical support to Sn and Si nanoparticles during lithiation. 2D graphene, however, results in Sn/graphene nanocomposites with a continuous capacity fade during cycling. It is anticipated that this is due to microstructural changes of Sn, however, no studies have been performed to examine the morphology of such cycled anodes. Hence, a new Sn/2D graphene nanocomposite was fabricated via a simple chemical synthesis, in which Sn nanoparticles (20-200 nm) were attached onto the graphene surface. The content of Sn was 10 wt.% and 20 wt.%. These nanopowders were cycled against pure Li-metal and, as in previous studies, a significant capacity decrease occurred during the first several cycles. Transmission and scanning electron microscopy revealed that during long term cycling electrochemical coarsening took place, which resulted in an increased Sn particle size of over 200 nm, which could form clusters that were 1 m. Such clusters result in a poor electrochemical performance since it is difficult for complete lithiation of the Sn to occur. It is hence concluded that the inability of Sn/2D graphene anodes to retain high capacities is due to coarsening that occurs during cycling. In addition to using forms of carbon to buffer the Sn expansion, it has been proposed to alloy Sn with S, which has a low redox potential vs Li⁰/Li⁺. Therefore, another new anode proposed here is that of SnS attached to graphite. The as prepared powders had a flower-like structure of the SnS alloy. Electrochemical cycling and subsequent microstructural analysis showed that after electrochemical cycling this pattern was destroyed and replaced by Sn and SnS nanoparticles. Based on the electron microscopy and XRD analysis, it was concluded that selective leaching of S occurs during lithiation of SnS particles, which results into nano SnS and Sn particles to be distributed throughout the electrolyte or SEI layer, without being able to take part in the electrochemical reactions. This mechanism has not been noted before for SnS anodes and indicates that it may not be possible to retain the initial morphology of SnS alloy during cycling, or the ability of SnS to be active throughout long term cycling. To conclude it should be stated that the goal and novelty of this thesis was (i) the fabrication of new Si, Sn/graphene and SnS/C nanostructures that can be used as anodes in Li-ion batteries and (ii) the documentation of the mechanisms that disrupt the initial structural stability of Sn/2D graphene and SnS/C anodes and result in severe capacity loss during long term cycling (over 100 cycles). These systems are of high interest to the electrochemistry community and battery developers.