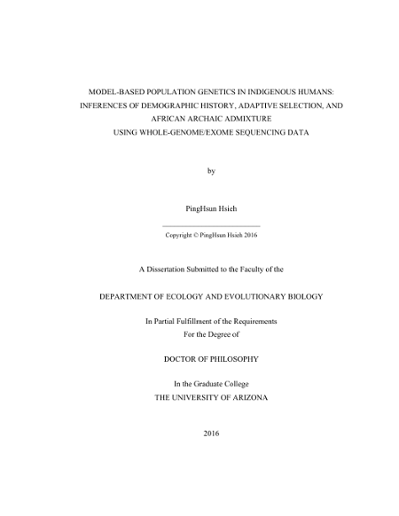 Reconstructing the origins and evolutionary journey of humans is a central piece of biology. Complementary to archeology, population genetics studying genetic variation among individuals in extant populations has made considerable progress in understanding the evolution of our species. Particularly, studies in indigenous humans provide valuable insights on the prehistory of humans because their life history closely resembles that of our ancestors. Despite these efforts, it can be difficult to disentangle population genetic inferences because of the interplay among evolutionary forces, including mutation, recombination, selection, and demographic processes. To date, few studies have adopted a comprehensive framework to jointly account for these confounding effects. The shortage of such an approach inspired this dissertation work, which centered on the development of model-based analysis and demonstrated its importance in population genetic inferences. Indigenous African Pygmy hunter-gatherers have been long studied because of interest in their short stature, foraging subsistence strategy in rainforests, and long-term socio-economic relationship with nearby farmers. I proposed detailed demographic models using genomes from seven Western African Pygmies and nine Western African farmers (Appendix A). Statistical evidence was shown for a much deeper divergence than previously thought and for asymmetric migrations with a larger contribution from the farmers to Pygmies. The model-based analyses revealed significant adaption signals in the Pygmies for genes involved in muscle development, bone synthesis, immunity, reproduction, etc. I also showed that the proposed model-based approach is robust to the confounding effects of evolutionary forces (Appendix A). Contrary to the low-latitude African homeland of humans, the indigenous Siberians are long-term survivors inhabiting one of the coldest places on Earth. Leveraging whole exome sequencing data from two Siberian populations, I presented demographic models for these North Asian dwellers that include divergence, isolation, and gene flow (Appendix B). The best-fit models suggested a closer genetic affinity of these Siberians to East Asians than to Europeans. Using the model-based framework, seven NCBI BioSystems gene sets showed significance for polygenic selection in these Siberians. Interestingly, many of these candidate gene sets are heavily related to diet, indicating possible adaptations to special dietary requirements in these populations in cold, resource-limited environments. Finally, I moved beyond studying the history of extant humans to explore the origins of our species in Africa (Appendix C). Specifically, with statistical analyses using genomes only from extant Africans, I rejected the null model of no archaic admixture in Africa and in turn gave the first whole-genome evidence for interbreeding among human species in Africa. Using extensive simulation analyses under various archaic admixture models, the results suggest recurrent admixture between the ancestors of archaic and modern Africans, with evidence that at least one such event occurred in the last 30,000 years in Africa.