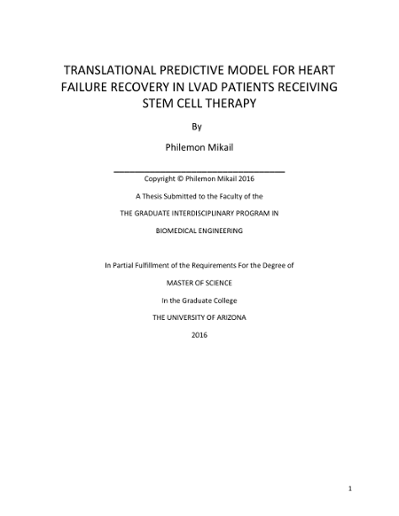 Introduction: Heart failure remains a major public health problem, with recent estimates indicating that end-stage heart failure with two-year mortality rates of 70-80% affects over 60,000 patients in the US each year. Medical management can be used but success declines for patients with end stage heart failure. Although cardiac transplantation is optimal, less than 2500 cardiac transplants are performed annually due to the severely limited supply of donor organs. Mechanical circulatory support (MCS) devices are now routinely used to bridge patients with end-stage heart failure who become critically ill until a donor heart is available. The use of stem cell therapy to treat heart failure has been gaining significant ground in recent years, specifically due to its regenerative properties, and both animal and human models have shown significant improvements in ventricular mass, ejection fraction, vascularization, wall thickness, and infarct size reduction. Using the patients' HeartWare HVAD device diagnostics, we were able to acquire our response variable; pulsatility. Pulsatility is a variable measure of the differential between minimum and maximum flow and is dependent on device motor speed, power, current, and fluid viscosity. This measurement is important as it relates to the contractility of the heart and could potentially be used as an end point in determining when a patient is healthy enough to have their HVAD explanted. We set out to develop a low cost and effective predictive model to determine amniotic mesenchymal stem cell's ability to repair compromised cardiac tissue of patients using the Total Artificial Heart (TAH) and Donovan Mock Circulation Tank (DMC). Methods: Predictive modelling was performed using the TAH and DMC. The system was set to a range from critical heart failure to a normal operating conditions through the variation of preload, afterload, and ventricular drive pressures with the intent of comparing the results to our patient population. Patients (n=7, 3 dilated, 4 ischemic) received intravenous and intra-myocardial injections of a heterogeneous amniotic mesenchymal stem cells mixture and liquid matrix (MSCs+LM) at HVAD implant. Groups were analyzed based on treatment; control (HVAD only, n=7) versus stem cells (HVAD + MSCs+LM). HeartWare log files were acquired from patients' devices and analyzed in SAS and Matlab. Results from the patient study were compared to the predictive model to determine levels of stem cell response. Results: Pulsatility was found to increase with left drive pressure and afterload. Lower drive pressures resulted in a drop off in pulsatility at higher afterloads while higher drive pressures were able to compensate for any afterload. Pulsatility also increased with preload but lower drive pressures were unable to fully eject at the highest preloads, resulting in a reduced pulsatility. We observed the effects of the stem cell injections on pulsatility and found that patients receiving therapy demonstrated statistically significant increases in pulsatility at 15-20 (p=.0487), 25-30 (p=.0131), 35-40 (p=.0333), and 75-80 (p=0.0476) days post implant. At minimum, when comparing the patient results to the in vitro model, the therapy resulted in a progression from end stage HF conditions to medium cardiac function conditions. At maximum, the therapy resulted in a progression from end stage HF to normal healthy operating cardiac function. Conclusions: Stem cells demonstrated a significantly increased rate of change in pulsatility within the first 40 days and at 80 days post implant when compared to control. They also demonstrated progression from end stage HF to normal healthy cardiac function at two time periods (Days 40, 90). These results justify expansion of the study to encompass a larger patient population to verify the results of the in vitro model to predict cardiac regeneration with multiple functional status indicators.