Mechanism and Functional Consequence of MRP2 Mislocalization in Nonalcoholic Steatohepatitis 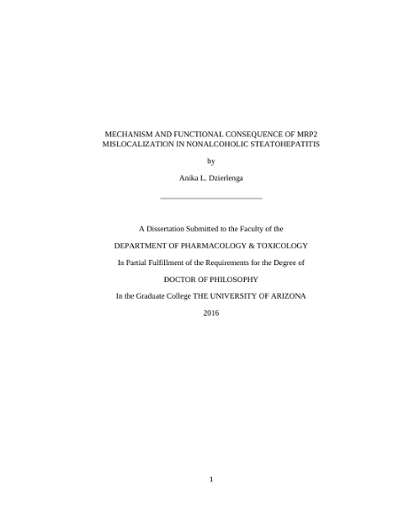 Adverse drug reactions (ADRs) are a pervasive complication in the realm of pharmacotherapy. At the root of ADRs lies interindividual variability in drug response, which can range from allergic reactions, to genetic variability, to any factors that influence the pharmacokinetics of a drug. Nonalcoholic steatohepatitis (NASH) is the late-stage of non-alcoholic fatty liver disease (NAFLD), characterized by fat deposition, oxidative stress, inflammation, and fibrosis. Over the last several years, alterations in drug metabolizing enzymes and transporters have been broadly characterized through NAFLD progression. Multidrug resistance-associated protein 2 (MRP2) is a canalicular efflux transporter that directs the biliary elimination of a wide variety of xenobiotics and metabolites. In NASH, MRP2 is mislocalized away from the canalicular membrane in a post-translational event. The mechanism and extent of this mislocalization has yet to be elucidated. While transporter misregulation has been shown to influence the disposition of a variety of substrates, the direct impact of MRP2 mislocalization on its overall transport capacity, and pharmacologic consequence of this change, is unknown. The purpose of this study was to elucidate the mechanism behind, and functional consequence of, MRP2/Mrp2 mislocalization in NASH, predominantly using the rodent methionine-and-choline-deficient (MCD) dietary model.To identify the mechanism of MRP2/Mrp2 mislocalization, a comparison of the activation status of various mediators of MRP2/Mrp2 retrieval was conducted between healthy and NASH livers. Results in rat samples and human NASH samples indicate that activation changes of these mediators, including radixin, PKCα, PKCδ, and PKA, are consistent with a shift toward active retrieval of MRP2/Mrp2 from the membrane, and some evidence of impaired membrane insertion is also present. Measurement of Mrp2 transport capacity was completed using pemetrexed, a novel Mrp2 probe substrate. Comparison of biliary excretion of pemetrexed between wild-type and Mrp2^(-/-) rats shows a 100% decrease, confirming that it relies upon Mrp2 for biliary excretion. NASH rats exhibited a 60% decrease in pemetrexed levels in the bile compared to their control counterparts, indicating that Mrp2 transport capacity is severely impaired in NASH rats. Finally, to ascertain the pharmacologic consequence of impaired Mrp2 transport, a study was conducted measuring the effects of the active morphine glucuronide on control and NASH rats. NASH rats exhibited a decreased biliary excretion, and increased systemic retention, of M3G. While they did also exhibit increased antinociception of M6G, the definitive impact of altered disposition on pharmacologic response was masked due to the interference of an MCD dietary effect on antinociception. Overall, the data reported herein identify active membrane retrieval as a mechanism of MRP2/Mrp2 mislocalization in NASH, and that mislocalization results in a 60% decrease in overall Mrp2 transport capacity. This decrease significantly hinders biliary excretion of Mrp2 substrates, and may result in ADRs by contributing to interindividual variability in drug response.