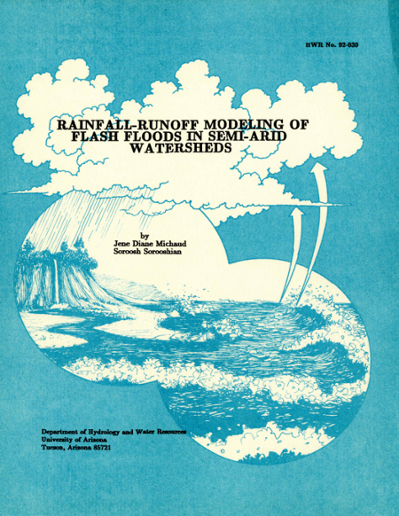 Flash floods caused by localized thunderstorms are a natural hazard of the semi -arid Southwest, and many communities have responded by installing ALERT flood forecasting systems. This study explored a rainfall- runoff modeling approach thought to be appropriate for forecasting in such watersheds. The kinematic model KINEROS was evaluated because it is a distributed model developed specifically for desert regions, and can be applied to basins without historic data. This study examined the accuracy of KINEROS under data constraints that are typical of semi -arid ALERT watersheds. The model was validated at the 150 km2, semi -arid Walnut Gulch experimental watershed. Under the conditions examined, KINEROS provided poor simulations of runoff volume and peak flow, but good simulations of time to peak. For peak flows, the standard error of estimate was nearly 100% of the observed mean. Surprisingly, when model parameters were based only on measurable watershed properties, simulated peak flows were as accurate as when parameters were calibrated on some historic data. The accuracy of KINEROS was compared to that of the SCS model. When calibrated, a distributed SCS model with a simple channel loss component was as accurate as KINEROS. Reasons for poor simulations were investigated by examining a) rainfall sampling errors, b) model sensitivity and dynamics, and c) trends in simulation accuracy. The cause of poor simulations was divided between rainfall sampling errors and other problems. It was found that when raingage densities are on the order of 1/20 km2, rainfall sampling errors preclude the consistent and reliable simulation of runoff from localized thunderstorms. Even when rainfall errors were minimized, accuracy of simulations were still poor. Good results, however, have been obtained with KINEROS on small watersheds; the problem is not KINEROS itself but its application at larger scales. The study also examined the hydrology of thunderstorm -generated floods at Walnut Gulch. The space -time dynamics of rainfall and runoff were characterized and found to be of fundamental importance. Hillslope infiltration was found to exert a dominant control on runoff, although flow hydraulics, channel losses, and initial soil moisture are also important. Watershed response was found to be nonlinear.

Technical Reports on Hydrology and Water Resources, No. 32-030

Numerous people have contributed to this study. David Woolhiser was an especially valuable source of expert guidance, inspiration and encouragement. The scientific endeavors of David Goodrich paved the way for this research. Dr. Goodrich also provided the computer code used in this study and valuable advice and discussions. The research also benefitted from discussions with Vijai Gupta and Kirk Vincent. John Schaake recommended that I investigate the question of watershed linearity using kinematic models. Victor Baker, T.C. Yeh, David Woolhiser and Vijai Gupta provided constructive comments on the manuscript. Joan Sedik, Carla Frascari, Jennifer Lutes, Maya Desai, Fatima Lopes, and Tim Keefer provided substantial and valuable assistance. Financial assistance was provided by the National Science Foundation (grant BCS- 8920851), the U.S. Geological Survey (grant 14 -08- 0001- 61548), and the U.S. National Weather Service, under Cooperative Agreement NA90AA- H- HY404. The first author also received support in the form of scholarships from the Phoenix chapter of Achievement Rewards for College Scientists, Salt River Project Fellowships, the Horton Grant of the American Geophysical Union, and the Mr. and Mrs. John Harshbarger Fellowship. This research could not have been undertaken without the aforementioned financial support, and it is gratefully acknowledged. Also, this research would not have been possible without the data collected by the Southwest Aridland Research Center, U.S. Department of Agriculture, Agricultural Research Service.