THE HYDROLOGY AND RIPARIAN RESTORATION OF THE BILL WILLIAMS RIVER BASIN NEAR PARKER, ARIZONA 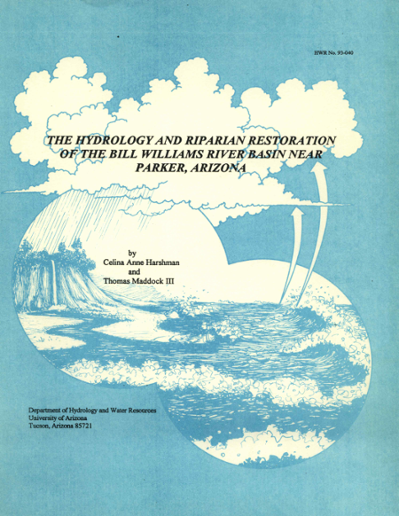 Riparian forests, which support rich biological diversity in the North American southwest, have experienced a sharp decline in the last century. The extent of this decline has been estimated to range from 70% to 95% across the southwest (Johnson and Haight, 1984). The principal components of riparian forests which sustain a broad spectrum of species and describe the overall health of a system are cottonwoods (sp. Populus) and willows (sp. Salix). The importance of cottonwoods is aptly described by Rood et al (1993): "....these trees provide the foundation of the riparian forest ecosystem in semi -arid areas of western North America. Unlike wetter areas to the east and west, a loss of cottonwoods in these riparian areas is not compensated through enrichment from other tree species. If the cottonwoods die, the entire forest ecosystem collapses." Cottonwood and willow species are adversely affected by anthropogenic influences ranging most prominently from the introduction of regulated flows via dams to agricultural clearing, water diversions, livestock grazing, and domestic settlement. These influences effectively alter the system hydrology that the forests rely upon. As the widespread destruction of these forests and the associated irreparable damage to endangered species habitat has come into clear view in the past decade, research efforts have focused upon identifying the ecological needs of riparian systems. The potential of modifying such systems to soften the human impact upon them, in effect presenting further alterations on a hydrologic system to return it to its natural regime, is another component of the research on riparian systems. The Bill Williams River riparian corridor, near Parker, Arizona (Figure 1.1), contains the last extensive native riparian habitat along the lower Colorado River (BWC Technical Committee, 1993). This unique resource was established as the Bill Williams River Management Unit, Havasu National Wildlife Refuge in 1941 and covers 6105 acres along the lower 12 miles of the Bill Williams River (Rivers West, 1990). The Bill Williams Unit is currently managed by the U.S. Fish and Wildlife Service of the U.S. Department of Interior. The U.S. Fish and Wildlife Service also funded this research effort. The lush vegetation corresponding to the wetland conditions along the valley floor sharply contrast with the Sonoran desert landscape of the upper valley walls creating a magnificent picture. The Management Unit terminates at Lake Havasu, which forms the confluence of the Bill Williams and Colorado Rivers. The system provides habitat for a wide variety of species, many of which are endangered or state- listed species, including habitat for neotropical migratory birds. This habitat has undergone serious degeneration during the past quarter century. The recruitment of cottonwood and willow trees has been fatally interrupted by anthropogenic encroachment in the form of the construction of Alamo Dam in 1969 at the head of the Bill Williams River and commercial development along the River.

Technical Reports on Hydrology and Water Resources, No. 93-040

Research and development was supported in part by the U.S. Fish and Wildlife Service. The views and conclusions contained in this document are those of the authors and should not be interpreted as necessarily representing the officiial policies, either expressed or implied, the United States Government. The authors gratefully acknowledge the efforts of numerous individuals who made this manuscript a reality. Many thanks to the U.S. Fish and Wildlife Service for funding this research and providing for several site visits to the Bill Williams River, to Bob Mac Nish for his kindly but to- the -point review, to Pete Hawkins for advice on Riparian Systems, and to Mike Jones who not only helped developed the ground water flow model, MODXX, used in this research but contributed technical support and advice throughout the modeling effort. Special thanks to Les Cunningham and Steve Cullinan of the U.S. Fish and Wildlife Service for the support of this and on -going research.