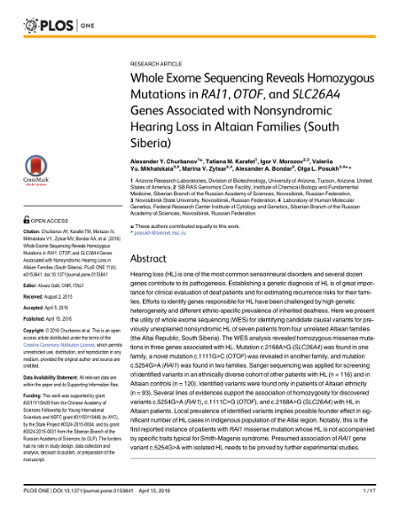 © 2016 Churbanov et al. This is an open access article distributed under the terms of the Creative Commons Attribution License , which permits unrestricted use, distribution, and reproduction in any medium, provided the original author and source are credited

Hearing loss (HL) is one of the most common sensorineural disorders and several dozen genes contribute to its pathogenesis. Establishing a genetic diagnosis of HL is of great importance for clinical evaluation of deaf patients and for estimating recurrence risks for their families. Efforts to identify genes responsible for HL have been challenged by high genetic heterogeneity and different ethnic-specific prevalence of inherited deafness. Here we present the utility of whole exome sequencing (WES) for identifying candidate causal variants for previously unexplained nonsyndromic HL of seven patients from four unrelated Altaian families (the Altai Republic, South Siberia). The WES analysis revealed homozygous missense mutations in three genes associated with HL. Mutation c.2168A>G (SLC26A4) was found in one family, a novel mutation c.1111G>C (OTOF) was revealed in another family, and mutation c.5254G>A (RAI1) was found in two families. Sanger sequencing was applied for screening of identified variants in an ethnically diverse cohort of other patients with HL (n = 116) and in Altaian controls (n = 120). Identified variants were found only in patients of Altaian ethnicity (n = 93). Several lines of evidences support the association of homozygosity for discovered variants c.5254G>A (RAI1), c.1111C>G (OTOF), and c.2168A>G (SLC26A4) with HL in Altaian patients. Local prevalence of identified variants implies possible founder effect in significant number of HL cases in indigenous population of the Altai region. Notably, this is the first reported instance of patients with RAI1 missense mutation whose HL is not accompanied by specific traits typical for Smith-Magenis syndrome. Presumed association of RAI1 gene variant c.5254G>A with isolated HL needs to be proved by further experimental studies.

This work was supported by grant #2011Y1SA09 from the Chinese Academy of Sciences Fellowship for Young International Scientists and NSFC grant #31150110466 (to AYC), by the State Project #0324-2015-0004, and by grant #0324-2015-0031 from the Siberian Branch of the Russian Academy of Sciences (to OLP). The funders had no role in study design, data collection and analysis, decision to publish, or preparation of the manuscript.