The SPHERE view of the planet-forming disk around HD 100546 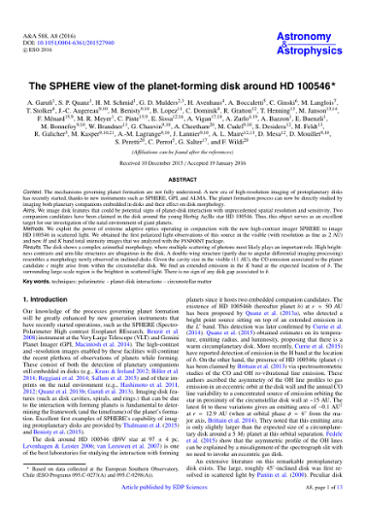 Context. The mechanisms governing planet formation are not fully understood. A new era of high-resolution imaging of protoplanetary disks has recently started, thanks to new instruments such as SPHERE, GPI, and ALMA. The planet formation process can now be directly studied by imaging both planetary companions embedded in disks and their e ff ect on disk morphology. Aims. We image disk features that could be potential signs of planet-disk interaction with unprecedented spatial resolution and sensitivity. Two companion candidates have been claimed in the disk around the young Herbig Ae /Be star HD 100546. Thus, this object serves as an excellent target for our investigation of the natal environment of giant planets. Methods. We exploit the power of extreme adaptive optics operating in conjunction with the new high-contrast imager SPHERE to image HD 100546 in scattered light. We obtained the first polarized light observations of this source in the visible (with resolution as fine as 2 AU) and new H and K band total intensity images that we analyzed with the p y n p o i n t package. Results. The disk shows a complex azimuthal morphology, where multiple scattering of photons most likely plays an important role. High brightness contrasts and arm-like structures are ubiquitous in the disk. A double-wing structure (partly due to angular di ff erential imaging processing) resembles a morphology newly observed in inclined disks. Given the cavity size in the visible (11 AU), the CO emission associated to the planet candidate c might arise from within the circumstellar disk. We find an extended emission in the K band at the expected location of b. The surrounding large-scale region is the brightest in scattered light. There is no sign of any disk gap associated to b.

We thank Paola Pinilla and Sean Brittain for the fruitful scientific discussion, and the referee for a thorough review that helped improve the text. We are grateful to the ESO technical operators at the Paranal observatory for their valuable help during the observations. Part of this work has been carried out within the framework of the National Centre for Competence in Research PlanetS supported by the Swiss National Science Foundation. S.P.Q., H.M.S., and M.R.M. acknowledge the financial support of the SNSF. HA acknowledges support from the Millennium Science Initiative (Chilean Ministry of Economy), through grant "Nucleus P10-022-F" and financial support from FONDECYT grant 3150643. This research has made use of the SIMBAD database, operated at the CDS, Strasbourg, France. SPHERE is an instrument designed and built by a consortium consisting of IPAG (Grenoble, France), MPIA (Heidelberg, Germany), LAM (Marseille, France), LESIA (Paris, France), Laboratoire Lagrange (Nice, France), INAF - Osservatorio di Padova (Italy), Observatoire de Geneve (Switzerland), ETH Zurich (Switzerland), NOVA (Netherlands), ONERA (France), and ASTRON (Netherlands) in collaboration with ESO. SPHERE was funded by ESO, with additional contributions from the CNRS (France), MPIA (Germany), INAF (Italy), FINES (Switzerland) and NOVA (Netherlands). SPHERE also received funding from the European Commission Sixth and Seventh Framework Programs as part of the Optical Infrared Coordination Network for Astronomy (OPTICON) under grant number RII3-Ct-2004-001566 for FP6 (2004 2008), grant number 226604 for FP7 (2009 2012), and grant number 312430 for FP7 (2013 2016).