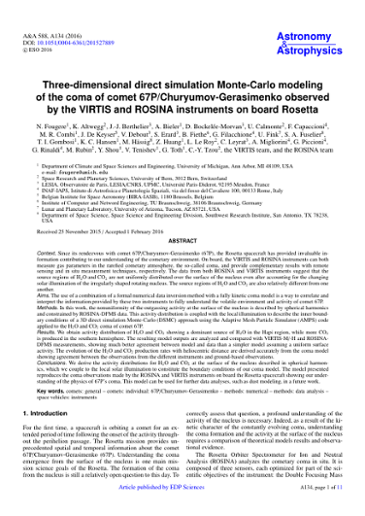 Three-dimensional direct simulation Monte-Carlo modeling of the coma of comet 67P/Churyumov-Gerasimenko observed by the VIRTIS and ROSINA instruments on board Rosetta 2016, 588:A134 Astronomy & Astrophysics

Context. Since its rendezvous with comet 67P/Churyumov-Gerasimenko (67P), the Rosetta spacecraft has provided invaluable information contributing to our understanding of the cometary environment. On board, the VIRTIS and ROSINA instruments can both measure gas parameters in the rarefied cometary atmosphere, the so-called coma, and provide complementary results with remote sensing and in situ measurement techniques, respectively. The data from both ROSINA and VIRTIS instruments suggest that the source regions of H2O and CO2 are not uniformly distributed over the surface of the nucleus even after accounting for the changing solar illumination of the irregularly shaped rotating nucleus. The source regions of H2O and CO2 are also relatively different from one another. Aims. The use of a combination of a formal numerical data inversion method with a fully kinetic coma model is a way to correlate and interpret the information provided by these two instruments to fully understand the volatile environment and activity of comet 67P. Methods. In this work, the nonuniformity of the outgassing activity at the surface of the nucleus is described by spherical harmonics and constrained by ROSINA-DFMS data. This activity distribution is coupled with the local illumination to describe the inner boundary conditions of a 3D direct simulation Monte-Carlo (DSMC) approach using the Adaptive Mesh Particle Simulator (AMPS) code applied to the H2O and CO2 coma of comet 67P. Results. We obtain activity distribution of H2O and CO2 showing a dominant source of H2O in the Hapi region, while more CO2 is produced in the southern hemisphere. The resulting model outputs are analyzed and compared with VIRTIS-M/-H and ROSINADFMS measurements, showing much better agreement between model and data than a simpler model assuming a uniform surface activity. The evolution of the H2O and CO2 production rates with heliocentric distance are derived accurately from the coma model showing agreement between the observations from the different instruments and ground-based observations. Conclusions. We derive the activity distributions for H2O and CO2 at the surface of the nucleus described in spherical harmonics, which we couple to the local solar illumination to constitute the boundary conditions of our coma model. The model presented reproduces the coma observations made by the ROSINA and VIRTIS instruments on board the Rosetta spacecraft showing our understanding of the physics of 67P’s coma. This model can be used for further data analyses, such as dust modeling, in a future work.

This work was supported by contracts JPL#1266313 and JPL#1266314 from the US Rosetta Project and NASA grant NNX09AB59G from the Planetary Atmospheres Program. Work at UoB was funded by the State of Bern, the Swiss National Science Foundation, and by the European Space Agency PRODEX Program. Work at Southwest Research institute was supported by subcontract #1496541 from the Jet Propulsion Laboratory. Work at BIRA-IASB was supported by the Belgian Science Policy Office via PRODEX/ROSINA PEA C4000107705 and an Additional Researchers Grant (Ministerial Decree of 2014-12-19), as well as by the Fonds de la Recherche Scientifique grant PDR T.1073.14 Comparative study of atmospheric erosion. ROSINA would not give such outstanding results without the work of the many engineers, technicians, and scientists involved in the mission, in the Rosetta spacecraft, and in the ROSINA instrument team over the last 20 years whose contributions are gratefully acknowledged. The authors would like to thank ASI, Italy; CNES, France; DLR, Germany; and NASA, USA for supporting this research. VIRTIS was built by a consortium formed by Italy, France, and Germany under the scientific responsibility of the Istituto di Astrofisica e Planetologia Spaziali of INAF, Italy, which also guides the scientific operations. The consortium also includes the Laboratoire dtudes spatiales et d'instrumentation en astrophysique of the Observatoire de Paris, France, and the Institut fur Planetenforschung of DLR, Germany. The authors wish to thank the Rosetta Science Ground Segment and the Rosetta Mission Operations Centre for their continuous support. We thank the NASA Supercomputer Division at AMES for enabling us to perform the simulations presented in this paper on Pleiades supercomputers.