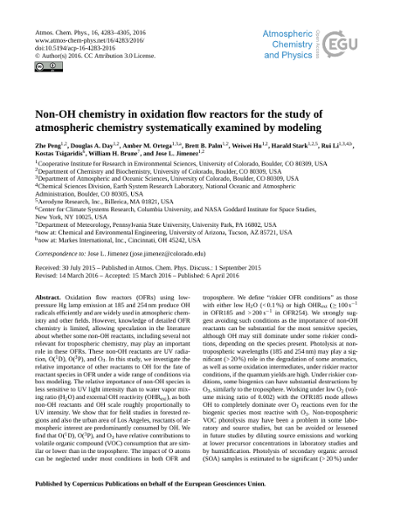 Non-OH chemistry in oxidation flow reactors for the study of atmospheric chemistry systematically examined by modeling 2016, 16 (7):4283 Atmospheric Chemistry and Physics

Oxidation flow reactors (OFRs) using low-pressure Hg lamp emission at 185 and 254 nm produce OH radicals efficiently and are widely used in atmospheric chemistry and other fields. However, knowledge of detailed OFR chemistry is limited, allowing speculation in the literature about whether some non-OH reactants, including several not relevant for tropospheric chemistry, may play an important role in these OFRs. These non-OH reactants are UV radiation, O(1D), O(3P), and O3. In this study, we investigate the relative importance of other reactants to OH for the fate of reactant species in OFR under a wide range of conditions via box modeling. The relative importance of non-OH species is less sensitive to UV light intensity than to water vapor mixing ratio (H2O) and external OH reactivity (OHRext), as both non-OH reactants and OH scale roughly proportionally to UV intensity. We show that for field studies in forested regions and also the urban area of Los Angeles, reactants of atmospheric interest are predominantly consumed by OH. We find that O(1D), O(3P), and O3 have relative contributions to volatile organic compound (VOC) consumption that are similar or lower than in the troposphere. The impact of O atoms can be neglected under most conditions in both OFR and troposphere. We define “riskier OFR conditions” as those with either low H2O (< 0.1 %) or high OHRext ( ≥  100 s−1 in OFR185 and > 200 s−1 in OFR254). We strongly suggest avoiding such conditions as the importance of non-OH reactants can be substantial for the most sensitive species, although OH may still dominate under some riskier conditions, depending on the species present. Photolysis at non-tropospheric wavelengths (185 and 254 nm) may play a significant (> 20 %) role in the degradation of some aromatics, as well as some oxidation intermediates, under riskier reactor conditions, if the quantum yields are high. Under riskier conditions, some biogenics can have substantial destructions by O3, similarly to the troposphere. Working under low O2 (volume mixing ratio of 0.002) with the OFR185 mode allows OH to completely dominate over O3 reactions even for the biogenic species most reactive with O3. Non-tropospheric VOC photolysis may have been a problem in some laboratory and source studies, but can be avoided or lessened in future studies by diluting source emissions and working at lower precursor concentrations in laboratory studies and by humidification. Photolysis of secondary organic aerosol (SOA) samples is estimated to be significant (> 20 %) under the upper limit assumption of unity quantum yield at medium (1 × 1013 and 1.5 × 1015 photons cm−2 s−1 at 185 and 254 nm, respectively) or higher UV flux settings. The need for quantum yield measurements of both VOC and SOA photolysis is highlighted in this study. The results of this study allow improved OFR operation and experimental design and also inform the design of future reactors.

We thank Veronica Vaida, Paul Ziemann, Andrew Lambe, and the PAM user community for useful discussions, Andrew Lambe and Daniel Tkacik for providing some OFR experimental data and the reviewers for their useful comments for improving the manuscript. This research was partially supported by CARB 11-305, DOE (BER/ASR) DE-SC0011105, NSF AGS-1243354 & AGS-1360834, and NASA NNX15AT96G. Amber M. Ortega acknowledges fellowships from DOE and CU Graduate School. Rui Li and Brett B. Palm acknowledge CIRES Fellowships. Brett B. Palm is grateful for a Fellowship from US EPA STAR (FP-91761701-0). Resources supporting this work were provided by the NASA High-End Computing (HEC) Program through the NASA Center for Climate Simulation (NCCS) at Goddard Space Flight Center.