Ground-based near-UV observations of 15 transiting exoplanets: constraints on their atmospheres and no evidence for asymmetrical transits 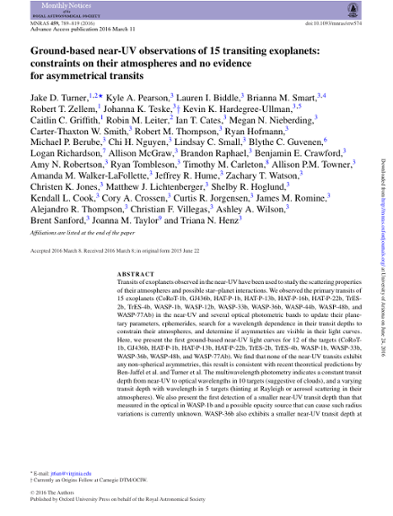 Ground-based near-UV observations of 15 transiting exoplanets: constraints on their atmospheres and no evidence for asymmetrical transits 2016, 459 (1):789 Monthly Notices of the Royal Astronomical Society

Transits of exoplanets observed in the near-UV have been used to study the scattering properties of their atmospheres and possible star-planet interactions. We observed the primary transits of 15 exoplanets (CoRoT-1b, GJ436b, HAT-P-1b, HAT-P-13b, HAT-P-16b, HAT-P-22b, TrES-2b, TrES-4b, WASP-1b, WASP-12b, WASP-33b, WASP-36b, WASP-44b, WASP-48b, and WASP-77Ab) in the near-UV and several optical photometric bands to update their planetary parameters, ephemerides, search for a wavelength dependence in their transit depths to constrain their atmospheres, and determine if asymmetries are visible in their light curves. Here, we present the first ground-based near-UV light curves for 12 of the targets (CoRoT-1b, GJ436b, HAT-P-1b, HAT-P-13b, HAT-P-22b, TrES-2b, TrES-4b, WASP-1b, WASP-33b, WASP-36b, WASP-48b, and WASP-77Ab). We find that none of the near-UV transits exhibit any non-spherical asymmetries, this result is consistent with recent theoretical predictions by Ben-Jaffel et al. and Turner et al. The multiwavelength photometry indicates a constant transit depth from near-UV to optical wavelengths in 10 targets (suggestive of clouds), and a varying transit depth with wavelength in 5 targets (hinting at Rayleigh or aerosol scattering in their atmospheres). We also present the first detection of a smaller near-UV transit depth than that measured in the optical in WASP-1b and a possible opacity source that can cause such radius variations is currently unknown. WASP-36b also exhibits a smaller near-UV transit depth at 2.6 sigma. Further observations are encouraged to confirm the transit depth variations seen in this study.