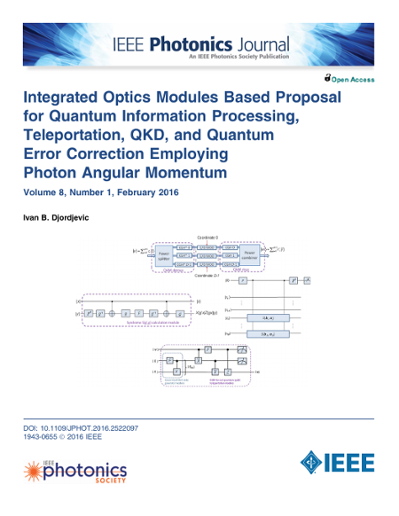 To address key challenges for both quantum communication and quantum computing applications in a simultaneous manner, we propose to employ the photon angular momentum approach by invoking the well-known fact that photons carry both the spin angular momentum (SAM) and the orbital angular momentum (OAM). SAM is associated with polarization, while OAM is associated with azimuthal phase dependence of the complex electric field. Given that OAM eigenstates are mutually orthogonal, in principle, an arbitrary number of bits per single photon can be transmitted. The ability to generate/analyze states with different photon angular momentum, by using either holographic or interferometric methods, allows the realization of quantum states in multidimensional Hilbert space. Because OAM states provide an infinite basis state, while SAM states are 2-D only, the OAM can also be used to increase the security for quantum key distribution (QKD) applications and improve computational power for quantum computing applications. The goal of this paper is to describe photon angular momentum based deterministic universal quantum qudit gates, namely, {generalized-X, generalized-Z, generalized-CNOT} qudit gates, and different quantum modules of importance for various applications, including (fault-tolerant) quantum computing, teleportation, QKD, and quantum error correction. For instance, the basic quantum modules for quantum teleportation applications include the generalized-Bell-state generation module and the QFT-module. The basic quantum module for quantum error correction and fault-tolerant computing is the nonbinary syndrome calculator module. The basic module for entanglement assisted QKD is either the generalized-Bell-state generation module or the Weyl-operator-module. The possibility of implementing all these modules in integrated optics is discussed as well. Finally, we provide security analysis of entanglement assisted multidimensional QKD protocols, employing the proposed qudit modules, by taking into account the imperfect generation of OAM modes.

This work was supported in part by the Office of Naval Research Multidisciplinary University Research Initiative project. Corresponding author: I. B. Djordjevic (e-mail: ivan@email.arizona.edu).