A riparian evapotranspiration package for MODFLOW-2000 and MODFLOW-2005 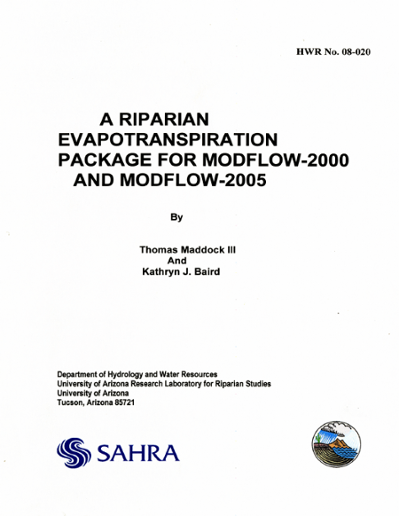 A new version of an evapotranspiration package for the U.S. Geological Survey's groundwater -flow model, MODFLOW, is documented. The Riparian Evapotranspiration Package (RIP-ET) provides flexibility in simulating riparian and wetland evapotranspiration (ET) not provided by the MODFLOW -2000 and MODFLOW 2005 traditional Evapotranspiration (EVT) Package, nor by the MODFLOW-2000 Segmented Function Evapotranspiration (ETS1) Package. This report describes how the package was conceptualized and provides input instructions, listings and explanations of the source code, and an example simulation. Traditional approaches to modeling ET processes assume a piecewise linear relationship between ET flux rate and hydraulic head. The RIP-ET replaces this traditional relationship with a segmented, nonlinear dimensionless curve that reflects the eco-physiology of riparian and wetland ecosystems. Evapotranspiration losses from these ecosystems are dependent not only on hydraulic head but on the plant types present. User -defined plant functional groups (PFGs) are used to elucidate the interactive processes of plant ET with groundwater conditions. Five generalized plant functional groups based on transpiration rates, plant rooting depth, and water tolerance ranges are presented: obligate wetland, shallow-rooted riparian, deep- rooted riparian, transitional riparian and bare ground /open water. Plant functional groups can be further divided into subgroups (PFSG) based on plant size, density or other user defined field. The RIP -ET allows for partial habitat coverage and mixtures of plant functional subgroups to be present in a single model cell. Habitat areas are designated by polygons. A polygon can contain a mixture of PFSGs and bare ground, and is assigned a calculated land surface elevation. This process requires a determination of fractional coverage for each of the plant functional subgroups present in a polygon to simulate the mixture of coverage types and resulting ET. The fractional cover within a cell has two components: 1) the polygonal fraction of active habitat in a cell, and 2) fraction of plant flux area in a polygon. The RIP -ET determines the ET rate for each plant functional group in a cell, the total ET in the cell, and the total ET rate over the region of simulation.

Technical Reports on Hydrology and Water Resources, No. 08-020

This research was supported in part by two grants. The first was an EPA -NSF Star Grant entitled "Restoring and Maintaining Riparian Integrity in Arid Watersheds," number R827150/01, which funded field experiments in the South Fork of the Kern River in California and the San Pedro River in Arizona. The second was an NCEA Global Change Division CO -OP Agreement entitled "Potential Effects of Climate Change on Biodiversity and Riparian Wildlife Habitat of the Upper San Pedro River," which funded development of this software package. The views and conclusions contained in this document are those of the authors and should not necessarily be interpreted as representing official policies, (expressed or implied) of the EPA or NCEA. We would like to thank our fellow grantees Julie Stromberg, Robert Glennon, and Bonnie Colby, who worked with us on the EPA -NSF project, and Jeff Price and again Julie Stromberg, who, worked with us on the NCEA project. A thank you also to our colleagues Bob MacNish, Phil Guertin, David Goodrich, Jim Shuttleworth, Paul Brooks and Ty Ferre. Thanks to the students that worked at the Kern River site: Asia Philben, Tom D. Maddock, Phil Bredfelt, Clair Tomkins and Chris Adams; and the students who worked at the tree torture site along the San Pedro River: Marla Odum, Kathleen McHugh, Asia Philben, Gerd Von Glinski, and Tom D. Maddock. We gratefully acknowledge the Palominas Trading Post without whose support the San Pedro project could not have been completed. Thanks also to Reed Tollifson and Jeff King at the Audubon Kern River Preserve, and a special thank you to Carolyn Dragoo for her assistance and support. This second version of RIP -ET has evolved from experiences in application to MODFLOW models of the South Fork Kern River Valley, California; the Lower Rio Grande Basin, New Mexico; Arivaca Watershed, Arizona; the Upper San Pedro River Basin, Arizona; and the Colorado River Delta, Mexico. We have also had written and verbal communications from a variety of users throughout the United States and a broad. Coding help has come from Arlen Harbough, Stan Leakes and Randy Hanson of the U.S. Geological Survey. In this go around, special thanks are in order for Hoori Ajami.