PLANKTONIC DYNAMICS AS AN INDICATOR OF WATER QUALITY IN LAKE MEAD 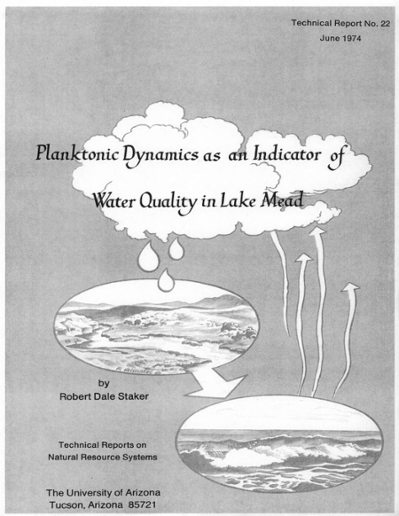 The purpose of this investigation was to identify the zooplankton arc. phytoplankton found in Lake Mead, to quantify their presence, to elucidate some temporal and spatial patterns, and to investigate some of the planktonic responses to physical, chemical, and biological parameters. Phytoplankton and zooplankton population samples were collected from eight different sites at 11 depths at six times over an annual period. These samples were collected with a 6 -liter Van Dorn sampler. Phytoplankton samples were preserved in Lugol's solution and the zooplankton were placed in formalin preservative. The 503 zooplankton population samples were scored in a ruled counting chamber using a stereomicroscope. Eighteen species of zooplankton were identified. The 274 phytoplankton samples were placed on Millipore filters and slides were prepared for examination with phase contrast microscopy. A total of at least 79 algae were found to comprise the phytoplankton flora. The zooplankton for the most part were rotifers, cladocerans, and copepods. Keratella, the principal rotifer, was found to be diacmic and Bosmina, Daphnia, the calanoid, cyclopoid, and nauplii copepods were monacmic. Spatial relationships across the reservoir indicate that Bosmina and cyclopoid copepods are water quality indicators. The late summer phytoplankton were mostly Cyanophyta with populations as large as 5 X 106 cells /liter occurring in Boulder Basin. Winter samples contained mostly diatoms and cryptomonads, while the spring phytoplankton was mainly Chlorophyta. The early summer flora showed a mixture of Chrysophyta, Chlorophyta, and Cryptophyta. Biomass determinations were made from average cell volumes and population counts. The blue -green alga Oscillatoria had the greatest biomass during the late summer period. Bacillariophyta reached a volumetric peak in late winter and the Chlorophyta in spring. The Cryptophyta showed a peak in winter while the Chrysophyta, represented mostly by the presence of Dinobryon, showed greatest population sizes in early summer. The Euglenophyta and Pyrrophyta were relatively unimportant groups of the biomass. Weak nocturnal migrations were exhibited by Asplanchna sp., Keratella cochlearis, and Bosmina longirostris. This conclusion was derived from an analysis of variance of the diurnal data. The copepod groups showed no migration patterns. Since this study was performed when the lake was isothermal, it is inferred that migration is a phenomenon not influenced by temperature. A transect study in Boulder Basin during the winter showed that Daphnia, Asplanchna, Chydorus, and Polyarthra, and possibly calanoid copepods, appear to be littoral, and are found mostly in the Las Vegas Wash area. Phytoplankton counts showed evidence for decreases in Bacillariophyta, Chlorophyta, Cyanophyta, and Cryptophyta across the basin from the wash to the dam area. Pyrrophyta, Chrysophyta, and Euglenophyta were not important in the phytoplankton flora at this season. Nygaard's and Pearsall's ratios and Palmer's pollution -tolerant algae indices were applied to the phytoplankton data. Results of the Nygaard and Pearsall ratios, the migration study, the transect study, and the population studies indicate that Boulder Basin is eutrophic.

Technical Reports on Hydrology and Water Resources, No. 22

The work upon which this publication is based was supported by funds provided by the United States Bureau of Reclamation, Region 3 (Contract No. 14-06-300-2210).