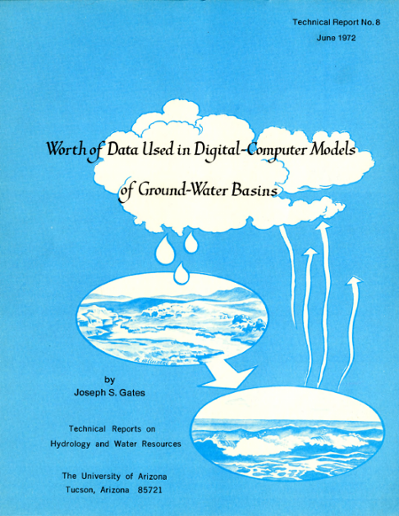 Two digital- computer models of the ground -water reservoir of the Tucson basin, in south - central Arizona, were constructed to study errors in digital models and to evaluate the worth of additional basic data to models. The two models differ primarily in degree of detail -- the large -scale model consists of 1,890 nodes, at a 1/2 -mile spacing; and the small -scale model consists of 509 nodes, at a l -mile spacing. Potential errors in the Tucson basin models were classified as errors associated with computation, errors associated with mathematical assumptions, and errors in basic data: the model parameters of coefficient of storage and transmissivity, initial water levels, and discharge and recharge. The study focused on evaluating the worth of additional basic data to the small -scale model. A basic form of statistical decision theory was used to compute expected error in predicted water levels and expected worth of sample data (expected reduction in error) over the whole model associated with uncertainty in a model variable at one given node. Discrete frequency distributions with largely subjectively- determined parameters were used to characterize tested variables. Ninety -one variables at sixty - one different locations in the model were tested, using six separate error criteria. Of the tested variables, 67 were chosen because their expected errors were likely to be large and, for the purpose of comparison, 24 were chosen because their expected errors were not likely to be particularly large. Of the uncertain variables, discharge /recharge and transmissivity have the largest expected errors (averaging 155 and 115 feet, respectively, per 509 nodes for the criterion of absolute value of error) and expected sample worths (averaging 29 and 14 feet, respectively, per 509 nodes). In contrast, initial water level and storage coefficient have lesser values. Of the more certain variables, transmissivity and initial water level generally have the largest expected errors (a maximum of 73 per feet per 509 nodes) and expected sample worths (a maximum of 12 feet per 509 nodes); whereas storage coefficient and discharge/ recharge have smaller values. These results likely are not typical of those from many ground -water basins, and may apply only to the Tucson basin. The largest expected errors are associated with nodes at which values of discharge /recharge are large or at which prior estimates of transmissivity are very uncertain. Large expected sample worths are associated with variables which have large expected errors or which could be sampled with relatively little uncertainty. Results are similar for all six of the error criteria used. Tests were made of the sensitivity of the method to such simplifications and assumptions as the type of distribution function assumed for a variable, the values of the estimated standard deviations of the distributions, and the number and spacing of the elements of each distribution. The results are sensitive to all of the assumptions and therefore likely are correct only in order of magnitude. However, the ranking of the types of variables in terms of magnitude of expected error and expected sample worth is not sensitive to the assumptions, and thus the general conclusions on relative effects of errors in different variables likely are valid. Limited studies of error propagation indicated that errors in predicted water levels associated with extreme erroneous values of a variable commonly are less than 4 feet per node at a distance of 1 mile from the tested node. This suggests that in many cases, prediction errors associated with errors in basic data are not a major problem in digital modeling.

Technical Reports on Hydrology and Water Resources, No. 8