The Role of Athlete Identity and Social Capital in the Post-College Lives of Black, Revenue-Generating Athletes 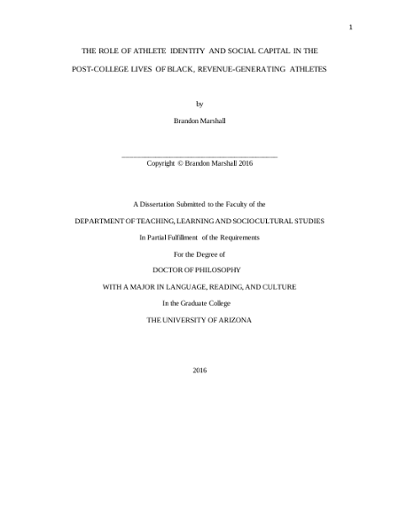 The members of the National Collegiate Athletic Association (NCAA) and their university partners consider themselves to be organizations dedicated to the well-being and lifelong success of student-athletes. They have measured their dedication to their student-athletes through degree attainment. The controversial issue of whether student-athletes should be paid has been debated in courtrooms, classrooms, locker rooms, and numerous mainstream media outlets. Regardless the debate platform, the NCAA and university partners have relied on the argument that student-athletes are amateurs, not employees and in exchange for their talents, a quality education is provided and paid for, which is more valuable (in the long-term) than paying them. This study used the NCAA and university partners' argument of a quality education as a proxy for pay to guide the research. Focusing on the most lucrative and controversial population of student-athletes, Black, revenue-generating football players, this study investigated if they were in fact being provided with a quality education accompanied with transferable skills that would give them success after their football careers were over. This study utilized qualitative research to investigate the pre-college, college, and post-college experiences and decision making of eight Black, former revenue-generating football players. The in-depth research was designed to chronicle the lived experiences of the participants in relation to their interaction with what this study has coined, the Infrastructure of College Sports (IOCS). The IOCS is the ideological and physical structure that manages student-athletes from college entrance to college exit. The IOCS, in correlation with theoretical concepts such as Athlete Identity and Social Capital, were used to investigate how the student's identity as an athlete, and social capital acquired prior to college, impacted decision making such as college, major and career choice. Furthermore, this study investigated how such factors impacted how they perceived themselves as a student.An in-depth analysis of the lives of the eight Black, former revenue generating football players, revealed that the NCAA and university partners use of degree attainment as the measure of success needs further evaluation. Though the majority of the participants did graduate, their post-college lives, which were impacted by their decisions made during college, resulted in unattainable professional careers. Identity confusion, professional limbo, and a feeling of betrayal towards the NCAA and university partners characterize each participant's current status. The participants' overdependence on their athlete identities impeded their growth as students, which hindered their preparation for life after college (i.e., finding a career). These findings were consistent with previous research on the topic (Adler & Adler, 1991; Beamon, 2012; Harrison et al., 2011; Brewer, Linder,& Raalte, 1993; Marsh & Shavelson, 1985; Sparkes, 1998). Additionally, the quantity and quality of social capital acquired prior to college impacted their perception of education, which was consistent with Bourdieu (1986) and Coleman's (1988) versions of social capital. The influence of the IOCS is instrumental in the successes and failures of student-athletes. Findings revealed that the IOCS, whose gatekeeper is the NCAA and university partners, is designed not to educate, enhance, or develop the student, but to engineer a stronger, more efficient athlete. The IOCS is organized in such a manner that if a student-athlete enters college academically unprepared, and psychologically imbalanced, that is, more an athlete than student, then there are protocols in place to pacify such student-athletes throughout their college careers. Student-athletes fitting the above descriptions are placed on a conveyor-belt of mediocrity; many important decisions are made for them with little resistance. They are clustered in classes and majors of least resistance. The participants' responses uncovered strong evidence that the IOCS takes advantage of student-athletes who are overly dependent on their sport for their own future financial gain. Overall, participant responses and descriptions of current living situations revealed that degree attainment did not result in complete, "first-class" educations because the degrees accompanying transferable employment skills were not clearly taught, defined, or even practically applicable, when the Black D-1 student-athlete sought employment in a post-college career track.