No evidence for contagious yawning in lemurs 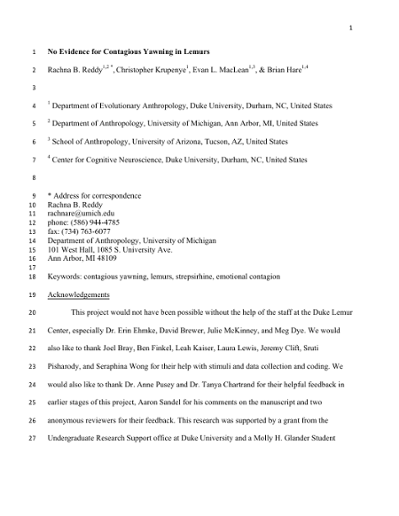 Among some haplorhine primates, including humans, relaxed yawns spread contagiously. Such contagious yawning has been linked to social bonds and empathy in some species. However, no studies have investigated contagious yawning in strepsirhines. We conducted an experimental study of contagious yawning in strepsirhines, testing ring-tailed and ruffed lemurs (n = 24) in a paradigm similar to one that has induced contagious yawning in haplorhines. First, in a control experiment, we investigated whether lemurs responded to projected video content in general (experiment 1). We showed them two videos to which we expected differential responses: one featured a terrestrial predator and the other a caretaker holding food. Next, to test for yawn contagion, we showed individual lemurs life-size video projections of groupmates and conspecific strangers yawning, and control footage of the same individuals at rest (experiment 2). Then, to examine whether a group context might enhance or allow for contagion, we exposed subjects to the same videos in a group setting (experiment 3). Lemurs produced alarm vocalizations and moved upward while viewing the predator, but not the caretaker, demonstrating that they do perceive video content meaningfully. However, lemurs did not yawn in response to yawning stimuli when tested alone, or with their groupmates. This study provides preliminary evidence that lemurs do not respond to yawning stimuli similarly to haplorhines, and suggests that this behavior may have evolved or become more exaggerated in haplorhines after the two major primate lineages split.