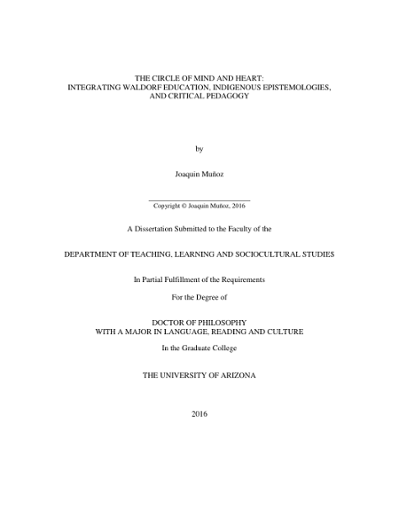 This dissertation examines the potential congruencies and complementarities of Waldorf education, Culturally Relevant Pedagogy (CRP), Culturally Responsive Schooling (CRS), Critical Pedagogy and Native American and Indigenous education. Waldorf education, a German education reform developed in the early 1920s, is a little researched schooling system, and previous research on this reform has examined its impacts within its traditional contexts, namely, private schools. At the same time, significant literature exists which addresses the importance and efficacy of reforms for students of color such as those in CRP, CRS and Critical Pedagogy. There is also a body of work which points to key pedagogical components which support Native American/Indigenous students in school. This dissertation examines the interplay between all three of these complex systems by examining attempts to integrate them in the classroom. By examining Waldorf education initiatives in three distinct contexts, I demonstrate that these reforms can work in concert without diminishing the efficacy of any of them. I explore three distinct contexts of Waldorf education. The first examined the impacts of Waldorf education on students who participated in the reform in a private Waldorf school, who transitioned to more traditional, mainstream classes. I conducted participant-observation of a local Waldorf school and in-depth interviews with 14 alumni to explore the impact of this reform. In the second context, I examined how students responded to the use of Waldorf-inspired methods in a community college course I taught, and I investigated their experiences of the reform. Seven students who participated were interviewed in order to investigate the impact of these reforms on their experience as college students. These interviews were complemented by teacher-research I conducted while teaching this Waldorf-inspired course. Finally, I explored the potential of Waldorf education as a reform for Native American students, examining my own incorporation of this reform with other pedagogical tools, such as CRP, CRS, and other forms of critical pedagogy. Included in this section of research are my reflections on a course I instructed with Waldorf-inspired reforms. I also explored various accounts of Waldorf-education reforms by tribal communities, like the Lakota Waldorf School in South Dakota. Several findings from the research conducted here are encouraging. Students from Waldorf school environments demonstrate critical skills and critique schooling environments, invoking stances familiar to critical pedagogues. Students from a Waldorf-inspired community college course were also critical of the typical schooling experiences they had encountered, and spoke of the enriching feeling in their Waldorf-inspired course. Investigation into the philosophical tenets of Waldorf education and Native American/Indigenous epistemologies shows several examples of overlap and similarity, the most striking being elements of spiritual belief and practice as foundational to Native American/Indigenous well-being, and the ability of Waldorf education to address this. While these fields may appear unrelated, this study explores the praxis of these seemingly disparate bodies of work, by examining their similarities and differences. Ultimately, I argue that these reforms can work in concert to support the academic success of culturally and linguistically diverse students and Native American/Indigenous students in particular. The research in these three contexts demonstrates need for further investigation into Waldorf education and its potential to support students of all backgrounds.