The Poles of Mars, Past and Present: A High-Resolution Observational Study of the Martian Polar Regions and their Connection to Climate 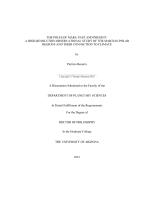 The poles of Mars, much like Earth's polar regions, are covered by kilometer-thick sheets of ice that interact with the Martian atmosphere and can record climatic changes in their stratigraphy. These polar caps are composed of several icy sections that interact with the Martian environment over different timescales. This dissertation describes my investigation of two of these units: The South Polar Residual Cap (SPRC), and the North Polar Layered Deposits (NPLD). The overarching theme of my work is to explore the connections between these caps and the current (SPRC) and past (NPLD) climate of Mars using a wide variety of data from spacecraft missions, and applying numerical models of surface properties and processes to interpret the observations. The SPRC is a ~10 meter thick slab of bright carbon dioxide ice that is covered by pits and scarps formed by differential sublimation. It is unclear whether this cap is in a state of net accumulation or net ablation. During the summer of Mars Year 28 (2006/2007), The High Resolution Imaging Science Experiment (HiRISE) observed an apparent increase in brightness near the edges of these pits that had not been seen before, and was not seen in the few years following. I analyzed hundreds of images from HiRISE and the Mars Orbiter Camera (MOC), as well as data from the Compact Reconnaissance Imaging Spectrometer for Mars (CRISM) to search for compositional and/or grain-size changes in the ice that could explain these "halos". I coupled my observations with numerical modeling of the spectral reflectance of the ice, to explore the effects of different ice grain sizes and minuscule dust inclusions on the observed brightness. I concluded that the features were caused by the occurrence of a global dust storm, after which the depositing dust actually acted to darken the SPRC. The halos were thus areas that had been kept relatively "clean" of the depositing dust, thanks to winds driven by enhanced sublimation from the pit walls. The fact that the halos did not show up in subsequent years means that they had not been exhumed, and that flat areas of the SPRC are in a state of net accumulation. It is likely that events like these result in new flat surfaces formed by snowfall driven by the depositing dust, which could explain the persistence of the cap throughout history. The polar layered deposits (PLD) are kilometer-thick stratified dome structures composed of dusty water ice that make up the bulk of the polar caps. The layers that make up the PLD are thought to record climatic variations over timescales of millions of years, in a similar way to Earth's ice caps. These caps are dissected by deep troughs that allow us to observe outcrops of their internal layers and map the stratigraphy. In the past, researchers have done this using layer brightness. However, remotely observed brightness has been shown to be affected by many external factors and may not represent an intrinsic property of the layers. Using Digital Terrain Models (DTM) made from HiRISE stereo images of NPLD outcrops, I mapped the change with depth of each layer's topographic protrusion from the scarp slope, defining the stratigraphy with a property related to the layers' resistance to erosion. I mapped the protrusion stratigraphy of 16 sites throughout the NPLD, and correlated the stratigraphic profiles from a subset of these sites, with Context Camera (CTX) images and signal-matching algorithms. This correlation combined topographic information with brightness information, resulting in an improvement of the current state of stratigraphic mapping of the NPLD, providing further evidence that layer sequences are continuous across the NPLD, and setting lower limits on relative accumulation rates for large sections of the cap.In order to search for a connection between the Martian paleoclimate and the NPLD stratigraphic record, I identified overlapping periodicities in the stratigraphic structure and compared them to periodicities in the climatic history, represented by the change in insolation with time at the North Pole over the last 5 Myr. I found that the ratio of stratigraphic wavelengths is systematically lower than the ratio between dominant modes of oscillation of the north polar insolation. However, a similar wavelet analysis of synthetic stratigraphic profiles created with a simple climate-driven model of accumulation revealed that a detectable non-linear relationship exists between the variation of insolation on the North Polar region of Mars and the stratigraphic record preserved in the NPLD. The dissertation is organized into four principal chapters and one final chapter with concluding remarks and future directions. Chapter 1 gives an introduction to Mars' polar regions and to the history of research in astronomically forced climate change through cyclostratigraphy, along with a short summary of the scope and main questions of this study. Chapter 2 details my study of the SPRC halos. Chapter 3 deals with the stratigraphic mapping of the NPLD through high-resolution topography, and Chapter 4 presents the results of my search for an astronomical forcing signal in the NPLD stratigraphy. Chapter 2 was published in the journal Icarus, in a special issue on the dynamic geologic processes of Mars and the science learned from continuous monitoring of these processes through remote sensing. Chapter 3 has been accepted for publication in the Journal of Geophysical Research. A modified version of Chapter 4 will be submitted to Nature Geoscience.