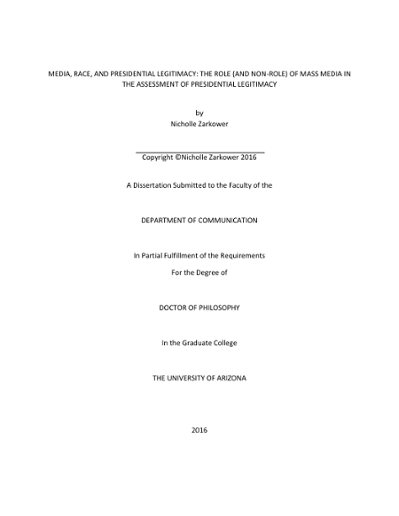 That Barack Obama's race was a factor, for both blacks and whites, in the 2008 general election is well-documented. As the majority in this country, the white electorate's response to the nation's first successful African-American presidential contender is of particular interest because it revealed the persistent effects of racism. Scholars have suggested contemporary forms of racism (e.g., Ditonto et al., 2013) explained the reluctance of white citizens to cast their ballots for an African American. This dissertation approaches the topic from a different angle, arguing deep-seated beliefs about which individual characteristics define a legitimate president, race in this project, affected voting decisions, especially among whites. Such beliefs, or "status expectations" (Ridgeway&Berger, 1986), are evident every day in social interactions and are also reflected in the mass media, especially in the vivid medium of television, which was proposed to reinforce status beliefs about presidential legitimacy among white viewers. African Americans, in contrast, were hypothesized be inured to status beliefs represented in television campaign coverage because of a protective, ingroup orientation called "linked fate," (Dawson, 2004), the belief that life chances of the individual are inextricably intertwined with life chances of the black race as a whole. Therefore, while mass media would affect whites' assessments of presidential legitimacy, linked fate would lead African Americans to reject the status beliefs about presidential legitimacy embedded in televised content because this medium has historically derogated their "ingroup". Findings, however, did not support this proposed insulating effect of linked fate, which was operationalized as perceived black racial group favoritism. In fact, moderating relationships, even when statistically significant, typically added little explanatory value to or confounded interpretation of the presidential legitimacy models. Thus, baseline models with main effects were the clearest and most statistically powerful in discerning which variables had the greatest impact on Obama and McCain presidential legitimacy assessments. For both candidates, party identification and race were consistently the most influential predictors. But, for McCain, the effect of conservative partisanship was particularly acute, with an effect size more than three times the effect size of race and four times the size of the most powerful media effect, Fox News believability. In contrast, multiple predictors of comparable effect size factored into Obama legitimacy assessments. Measured by both number of statistically significant media variables and magnitude of effect sizes, Obama's legitimacy assessments were more affected by media predictors than were McCain's. For Obama presidential legitimacy, the most influential variables were Democratic partisan identification, black race, Fox News believability (negatively related), and perceived black racial group favoritism. The next most influential predictors were CNN believability, MSNBC believability, and a status expectation measure of Obama's legitimacy. A third grouping of influential predictors consisted of broadcast believability, an education control variable, and a status expectation measure of McCain's legitimacy (negatively related). These predictors yielded a model that explained 43% of the variance in Obama legitimacy assessments, in contrast to the 28% of variance explained by the model without media variables. Though McCain's presidential legitimacy evaluations were driven primarily by Republican partisan identification and, to a lesser extent, race, several media variables attained statistical significance in the McCain model: the number of days respondents watched television for campaign news, CNN believability, and Fox News believability, all of which augmented McCain's legitimacy assessments. The proportion of variance in McCain legitimacy assessments explained by the model with media effects was 20%, compared to 16% in the model without media predictors, figures substantially lower than the 43% and 28% in the respective Obama models. The range of predictors in the Obama legitimacy model implied myriad perspectives notably absent in the McCain legitimacy model, a pattern that mirrored the diverse coalition that ultimately supported him. Therefore, despite only partial support for this dissertation's hypotheses, the results were consistent with the current partisan and racial divisions in this country, divisions that were affected by the media in the 2008 election.