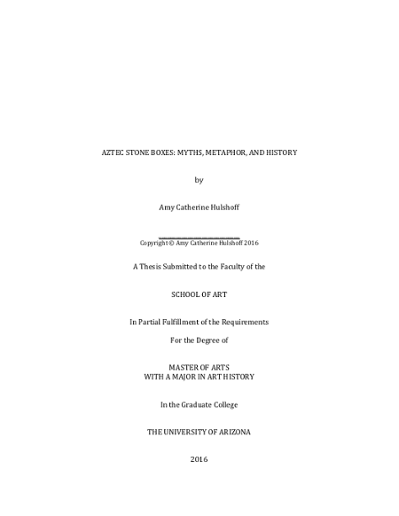 This essay is study of Aztec stone boxes from the pre-conquest Aztec empire. My study focuses on the interpretation of carvings on the surfaces, as well as the interiors and lids when applicable. The study includes not only traditionally functional boxes, but also altars (blocks or basins) and offering chambers, as comparative examples. The thesis focuses on three specific stone boxes located in museums in Mexico, Germany, and Great Britain: the Islas y Bustamante Box (Museo Nacional de Anthropologi­a, Mexico), the Hackmack Box (Museum fur Volkerkunde, Hamburg), and the Ahuitzotl Box (British Museum, London, and Museum fur Volkerkunde, Berlin). I am studying the iconographic programs, with a focus on themes of auto-sacrifice and creation, carved on the art objects themselves and their function as story-telling devices, with or without the contents that the box may have contained. In their forms, the objects themselves are metaphors for space, time, Aztec history, and Aztec creation myths. The Hackmack Box depicts the creation god, Quetzalcoatl (feathered serpent), and refers to the creation myth of mankind saved from the underworld and resurrected from the ashes of bones, using Quetzalcoatl's own blood. The box bears Montezuma's name glyph and is likely a tribute to his birth, his ascension and success as a ruler, and his piety. The Islas y Bustamante Box depicts the god of caves, Tepeyolotl, and refers to the myth that man ascended from caves, as all of life originated from the mouth of a cave that was also a natural spring. The box itself is a metaphor for this type of cave. The Ahuitzotl Box depicts the god of water Tlaloc, and refers to the myth of the tlaloques (helpers) discovery of "food-mountain", in other words, the discovery of maize that nourished the Aztec people. It has been linked to the dedication of the aqueduct built under the Aztec ruler Ahuitzotl, and serves as a tribute to this historical event. The cosmic arrangement of the motifs on these boxes reveal the object as a metaphor for space and time itself as they comply with the Aztec's earthly orientation of the heavens, the earth, an the underworld.