Bacterial Symbionts at the Colony and Individual Levels: Integration through Behavior and Morphology in a Social Insect 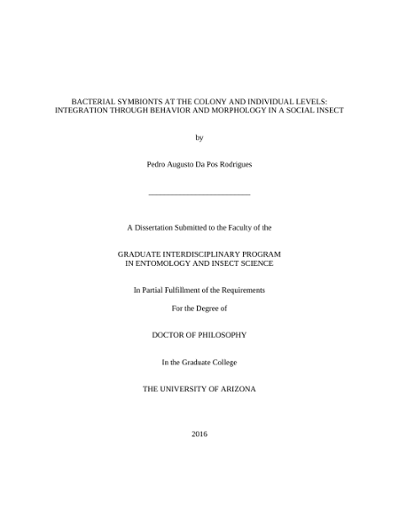 The determination of a symbiotic association as beneficial requires good assessment of the costs and benefits involved in the maintenance and transmission of these microbes across generations. In social insects, symbiotic associations are complex as they may involve a network of interactions between individual and colony that result in stable associations over evolutionary time. My goal was to investigate the roles of behavior and morphology as integrators that have enabled the benefits of harboring gut microbes to reach both adult and growing brood in a colony. To achieve this goal, I used turtle ants (Cephalotes), a group that has co-evolved with their gut microbes since the Eocene (Sanders et al. 2014) and that shows a variety of morphological and behavioral specializations likely connected to this symbiotic association. In my dissertation I present evidence that the specialized behavior and morphology of Cephalotes are indeed strongly associated with mechanisms that ensure stability of ant-gut microbe interactions over evolutionary time. In Appendix A, I show that a valve between the crop and midgut (proventriculus) of C. rohweri works as a filtration organ, capable of excluding possible pathogens from the mostly liquid diet consumed by turtle ants. In addition, the proventricular filter is also associated with the structuring of the gut microbiota, dividing it in at least two great groups: one upstream and another downstream of the proventriculus. Through behavioral observation and microscopy, we also suggest that the formation of the proventricular filter is only complete after young and sterile workers (callows) are inoculated with the core group of symbiotic bacteria. In Appendix B, I present results confirming that the compartmentalization of gut microbiota is also present in the congener C. varians. I compare these results with previously published data, defining the meta-communities of the gut microbiota, and demonstrate that the previously recognized core microbiota is composed of compartment-specific microbial communities and lineages. This compartmentalization of the gut microbiota is similar to the one found in highly specialized herbivores, both vertebrates and invertebrates. In addition, I also sampled the infrabuccal pocket, a characteristic oral cavity found in ants and that has largely been ignored in studies of gut symbiosis. Based on my results, I provide compelling evidence that hindgut microbes are inoculated into food particles trapped in the infrabuccal pocket, aiding in digestion of this substrate. Moreover, I suggest that trophallaxis olays a central role in inoculation of food and individuals, and might be responsible for the transmission of nutrients that are predicted to result from the gut bacteria metabolism. Finally, in Appendix C I characterize abdominal trophallaxis in C. rohweri to gain insight on its role in the context of symbiotic associations with gut microbes. I show that the hindgut contents, including bacteria, can be transmitted via abdominal trophallaxis. This interaction is found to occur between all combinations of major and minor workers, in addition to callows. The rate of solicitation of abdominal trophallaxis is higher when individuals are protein starved, indicating that hindgut content may also be nutritive. Using shotgun metagenomic data, we show that the microbiota present in the infrabuccal pocket (mostly hindgut bacteria) are indeed capable of re-utilizing nitrogen and synthesizing essential amino acids, in addition to breaking down plant material. We also report that oral trophallaxis is a possible route for transmission of crop-specific bacteria for callows, as this group has performed oral trophallaxis at a relatively higher rate than older workers. Put together, these results highlight the importance of nestmate interactions and gut morphology in the establishment and maintenance of symbiotic microbes in a social insect, introducing a new model for explaining the evolution and functioning of ant-gut microbe symbiosis.