Estrangement and Selfhood in the Classical Concept of Waṭan 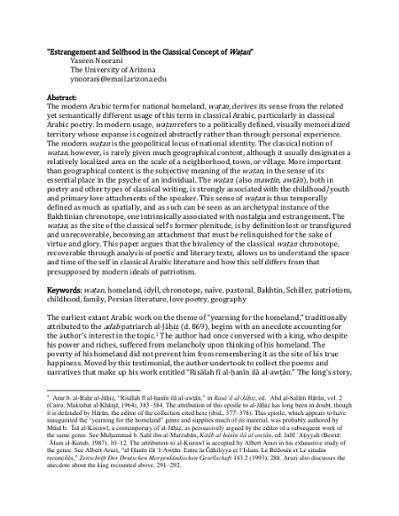 The modern Arabic term for national homeland, waṭan, derives its sense from the related yet semantically different usage of this term in classical Arabic, particularly in classical Arabic poetry. In modern usage, waṭan refers to a politically defined, visually memorialized territory whose expanse is cognized abstractly rather than through personal experience. The modern waṭan is the geopolitical locus of national identity. The classical notion of waṭan, however, is rarely given much geographical content, although it usually designates a relatively localized area on the scale of a neighborhood, town, or village. More important than geographical content is the subjective meaning of the waṭan, in the sense of its essential place in the psyche of an individual. The waṭan (also mawṭin, awṭān), both in poetry and other types of classical writing, is strongly associated with the childhood/youth and primary love attachments of the speaker. This sense of waṭan is thus temporally defined as much as spatially, and as such can be seen as an archetypal instance of the Bakhtinian chronotope, one intrinsically associated with nostalgia and estrangement. The waṭan, as the site of the classical self’s former plenitude, is by definition lost or transfigured and unrecoverable, becoming an attachment that must be relinquished for the sake of virtue and glory. This paper argues that the bivalency of the classical waṭan chronotope, recoverable through analysis of poetic and literary texts, allows us to understand the space and time of the self in classical Arabic literature and how this self differs from that presupposed by modern ideals of patriotism.