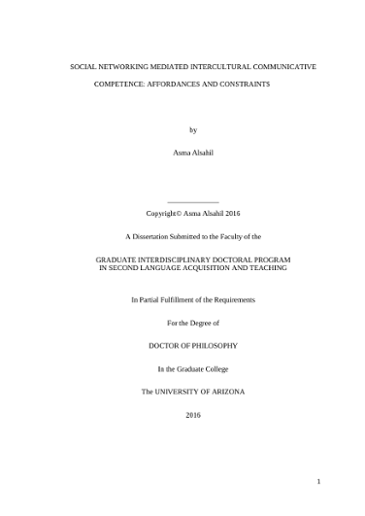 In the last few decades, Internet mediated intercultural competence has received a great attention in the field of applied linguistics and foreign language (FL) education especially with the evolution of web 2.0 technologies and social networking sites that facilitate interaction and communication between different cultural communities and individuals. Research in the field of Online Intercultural Exchange (OIE) is extremely varied and researchers have focused their attention on various aspects of OIE such as promoting intercultural communicative competence (Belz, 2002; O'Dowd, 2003; Schenker, 2011; Muller Hartman, 2000), facilitating online relationship building (Ware, 2005; Thorne, 2003, Jin & Erben, 2007) and improving writing skills (Ware, 2005; O'Dowd, 2003), developing pragmatic competence (Kinginger & Belz, 2005). Despite the plethora of research in this area, gaps in the literature still exist. First, literature lacks studies on language learners of less commonly taught languages (e.g. Arabic), (Thorne, 2006) and more importantly most of the studies are based on western contexts mainly in Europe and the USA. Second, few studies have explored the potentials of social networking sites on OIE projects in promoting intercultural learning (Aoki, 2009; Jin, 2015). In an effort to fill the gaps in the research, this study links English language learners (Saudis) with Arabic language learners (Americans) to investigate to what extent OIE on Facebook between these two groups of learners contributes to their intercultural communicative competence (ICC), specifically, exploring how and what are the components of Byram's model (ICC) manifested in the OIE project. Furthermore, it examined the affordances of Facebook in the OIE project according to students' use, practice and perception. Informed by a sociocultural framework, this study took a constructivist mixed methods approach to analysis of data from learners' online discourse on Facebook, the researcher's journal and observations, pre-survey, semi-structured interviews, and a questionnaire. Data analysis and interpretation revealed that when students' participation were mutually compatible, the students were able to build meaningful relationships, used a range of various questioning techniques, and engaged in genuine dialogue, OIE has a great potential for developing students' intercultural competence, as many objectives of Byram's ICC model were manifested. Findings also revealed that the project has strengthened Saudi students' cultural identity as they found the space to present their culture and country beyond the stereotypical image that dominates the media. As with regard to Facebook affordances, findings showed that the semiotic design and various semiotic resources of Facebook (e.g. multimodal posts, sharing, notification, friending, semi-automated features, etc.) afford students' engagement in intercultural discussion, students' collaboration, and students' interpersonal relationship building. The study also identified some of Facebook's constraints that limited students' participation due to technological, cultural and social factors. In sum this study illuminates the nature of online intercultural communication between Arabic and English language learners, contributing to the scarce research on this population. It also uncovers the unique affordances as well as constraints of Facebook on an OIE project. Based on this study, several pedagogical implications and suggestions are made for future research in the field of online intercultural exchanges.