Ontogeny of Foraging Competence in Capuchin Monkeys (Cebus capucinus) for Easy versus Difficult to Acquire Fruits: A Test of the Needing to Learn Hypothesis 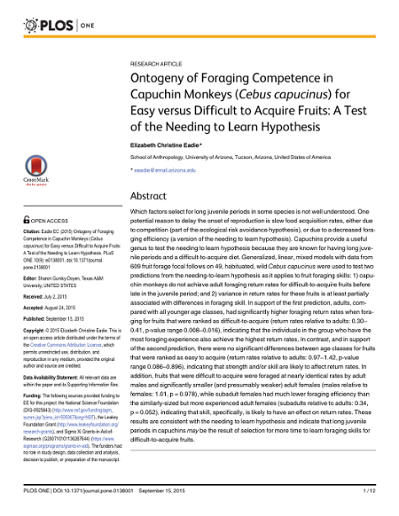 School of Anthropology, University of Arizona

Ontogeny of Foraging Competence in Capuchin Monkeys (Cebus capucinus) for Easy versus Difficult to Acquire Fruits: A Test of the Needing to Learn Hypothesis 2015, 10 (9):e0138001 PLOS ONE

© 2015 Elizabeth Christine Eadie. This is an open access article distributed under the terms of the Creative Commons Attribution License, which permits unrestricted use, distribution, and reproduction in any medium, provided the original author and source are credited.

Which factors select for long juvenile periods in some species is not well understood. One potential reason to delay the onset of reproduction is slow food acquisition rates, either due to competition (part of the ecological risk avoidance hypothesis), or due to a decreased foraging efficiency (a version of the needing to learn hypothesis). Capuchins provide a useful genus to test the needing to learn hypothesis because they are known for having long juvenile periods and a difficult-to-acquire diet. Generalized, linear, mixed models with data from 609 fruit forage focal follows on 49, habituated, wild Cebus capucinus were used to test two predictions from the needing-to-learn hypothesis as it applies to fruit foraging skills: 1) capuchin monkeys do not achieve adult foraging return rates for difficult-to-acquire fruits before late in the juvenile period; and 2) variance in return rates for these fruits is at least partially associated with differences in foraging skill. In support of the first prediction, adults, compared with all younger age classes, had significantly higher foraging return rates when foraging for fruits that were ranked as difficult-to-acquire (return rates relative to adults: 0.30– 0.41, p-value range 0.008–0.016), indicating that the individuals in the group who have the most foraging experience also achieve the highest return rates. In contrast, and in support of the second prediction, there were no significant differences between age classes for fruits that were ranked as easy to acquire (return rates relative to adults: 0.97–1.42, p-value range 0.086–0.896), indicating that strength and/or skill are likely to affect return rates. In addition, fruits that were difficult to acquire were foraged at nearly identical rates by adult males and significantly smaller (and presumably weaker) adult females (males relative to females: 1.01, p = 0.978), while subadult females had much lower foraging efficiency than the similarly-sized but more experienced adult females (subadults relative to adults: 0.34, p = 0.052), indicating that skill, specifically, is likely to have an effect on return rates. These results are consistent with the needing to learn hypothesis and indicate that long juvenile periods in capuchins may be the result of selection for more time to learn foraging skills for difficult-to-acquire fruits.