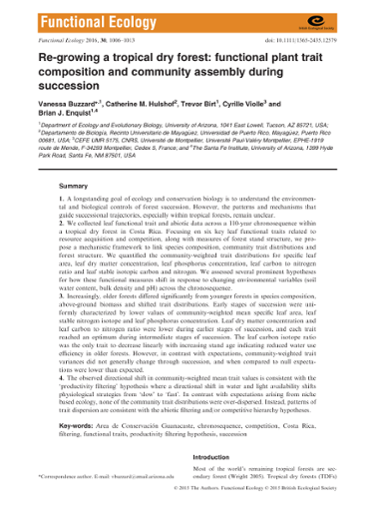 1. A longstanding goal of ecology and conservation biology is to understand the environmental and biological controls of forest succession. However, the patterns and mechanisms that guide successional trajectories, especially within tropical forests, remain unclear. 2. We collected leaf functional trait and abiotic data across a 110-year chronosequence within a tropical dry forest in Costa Rica. Focusing on six key leaf functional traits related to resource acquisition and competition, along with measures of forest stand structure, we propose a mechanistic framework to link species composition, community trait distributions and forest structure. We quantified the community-weighted trait distributions for specific leaf area, leaf dry matter concentration, leaf phosphorus concentration, leaf carbon to nitrogen ratio and leaf stable isotopic carbon and nitrogen. We assessed several prominent hypotheses for how these functional measures shift in response to changing environmental variables (soil water content, bulk density and pH) across the chronosequence. 3. Increasingly, older forests differed significantly from younger forests in species composition, above-ground biomass and shifted trait distributions. Early stages of succession were uniformly characterized by lower values of community-weighted mean specific leaf area, leaf stable nitrogen isotope and leaf phosphorus concentration. Leaf dry matter concentration and leaf carbon to nitrogen ratio were lower during earlier stages of succession, and each trait reached an optimum during intermediate stages of succession. The leaf carbon isotope ratio was the only trait to decrease linearly with increasing stand age indicating reduced water use efficiency in older forests. However, in contrast with expectations, community-weighted trait variances did not generally change through succession, and when compared to null expectations were lower than expected. 4. The observed directional shift in community-weighted mean trait values is consistent with the 'productivity filtering' hypothesis where a directional shift in water and light availability shifts physiological strategies from 'slow' to 'fast'. In contrast with expectations arising from niche based ecology, none of the community trait distributions were over-dispersed. Instead, patterns of trait dispersion are consistent with the abiotic filtering and/or competitive hierarchy hypotheses.