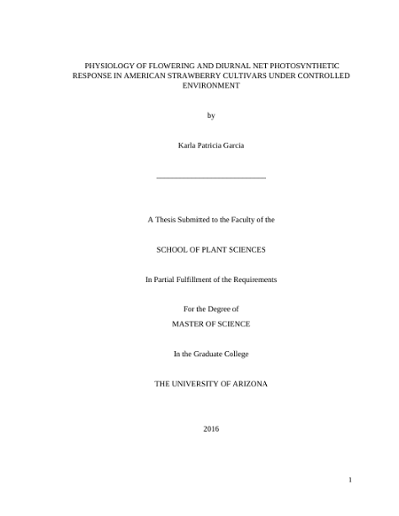 Strawberry production in the United States is almost entirely done in open-fields. Recently, interest in off-season strawberry production using controlled environment (CE) systems such as greenhouses and soilless cultivation has increased in the US. However, strawberry production in greenhouses is relatively new in North America and available information about greenhouse strawberry production is limited. Plant physiological responses to the environment must be well understood to maximize production using CE systems. In the present research, photoperiodic and photosynthetic responses of strawberry plants in greenhouse were studied. To evaluate photoperiodic response eight cultivars of strawberry widely cultivated in North America were subjected to varied photoperiods under an average daily temperature of 17 °C. Short-day (SD) cultivars included 'Radiance', 'F-127', 'Shuksan' and 'Chandler', and day-neutral/ever-bearing (DN/EB) cultivars included 'Albion', 'Portola', 'Monterey' and 'San Andreas'. SD cultivars were subjected to treatments of 11-h, 12-h, 13-h and 14-h photoperiod for 8 weeks. DN/EB cultivars were subjected to separated treatments of 8-h, 11-h, 14-h and 17-h photoperiod for up to 10 weeks. After 8 and 10 weeks of photoperiodic treatments in SD and DN/EB cultivars respectively, shoot apical meristems (SAM) were observed under microscope and classified into one of twelve developmental stages (Indices: 0-11). All SD cultivars examined showed a critical photoperiod between 13 h and 14 h. DN/EB cultivars 'San Andreas', 'Albion' and 'Monterey' presented facultative long-day response with positive correlation between SAM developmental indices and photoperiod after 8 weeks of treatment. 'Portola' showed non-significant influences of photoperiodic treatments in flower primordial development, suggesting day neutral response. However, further experiments must be conducted to confirm cultivar responses and identify possible interactions between photoperiod and temperature. The effect of light intensity and plant sink/source balance on strawberry plant photosynthesis was also investigated. Measurements of leaf net photosynthetic rate (Pn), stomatal conductance, intercellular CO2 concentration (Ci) and transpiration rate under near-saturated photosynthetically photon flux of 1,000ï ­mol m-2 s-1 and ambient CO2 concentration in strawberry cultivars 'Albion' and 'Nyoho'; and tomato cultivar 'Speedella'(comparison purposes) were conducted monthly in greenhouse during May 2014, and monthly from September 2015 through May 2016 (winter/spring production season). Hourly measurements were recorded hourly from 9 AM to 4 PM. Potential source strength was determined by the number of leaves and the daily light integral (DLI, 400-700 nm) and sink load from flowers and fruits was represented as the number of flowers and fruits. Seasonal changes in daily maximum Pn were observed, as well as diurnal change in Pn in both strawberry cultivars. A significant positive correlation was determined between the estimated ratios of sink/source and the slopes representing diurnal linear decline of Pn. Also, Pn was negatively correlated with Ci but not significantly correlated with vapor pressure deficit (VPD) in greenhouse, suggesting diurnal decline in Pn was likely due to negative feedback of photosynthesis caused by unbalance of sink and source, and not to water stress from high VPD. The photosynthetic capacity as affected by seasonal changes in greenhouse environment and its diurnal change as affected by sink/source balance could help develop more effective practices in CE strawberry production to maximize production. Also, photoperiodic response revealed in this study for American strawberry cultivars will specify conditions to induce flowering in these economically important cultivars off-season.