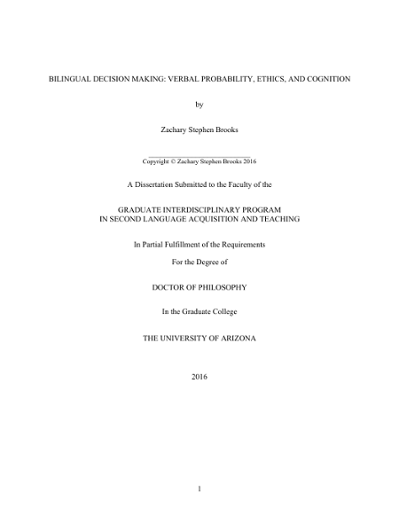 Bilingual decision making combines applied linguistics and decision making with an emphasis on cognitive behavioral approaches to explore the decision making of native (L1) and non-native (L2) speakers in the same contexts. In a Trolley Problem experiment, Costa et al. (2014) found that when people used their L2 they are more likely to make utilitarian choices than when they used their L1. Urbig et al. (2015) found that L2 speakers are more likely to act as free-riders in a public goods game, and Oosterbeek et al. (2004) found that Asian speakers reject more unfair proposals than Western speakers in an ultimatum game. This three-article dissertation emerges from an interest to extend the study of language acquisition beyond the classroom and into everyday settings in which humans make important decisions that have real-world consequences. To explore the issues surrounding this question, over 2,200 L1 and L2 speakers were recruited and participated in a series of experimental tests designed to determine if there were detectable decision-making differences using well-tested designs. In addition to the goals of identifying such differences, this dissertation looked to build pathways from applied linguistics into the applied nature of decision making. For example, in legal, medical, and management environments, how might native L1 and L2 speakers behave differently? The answer may suggest important implications for how people and institutions function. The basic question is whether L2 speakers make decisions that vary from L1 speakers, and in this dissertation the question was explored through three domains: verbal probability, ethics, and cognition. A brief summary of each article follows: Article #1: The first article employed verbal probabilities (e.g. likely, probable) that are used to estimate the likelihood of any particular event occurring. The study investigated whether probabilities expressed in words changes due to the language used to express those probabilities. Verbal probability expressions were used from a meta-analysis (Theil, 2002). In both monthly and daily contexts, given the same verbal probabilities L2 speakers gave higher numerical estimations than L1 speakers. In total, 301 (L1=56; L2=245) subjects participated in two experiments. Article #2: To study possible ethical decision-making distinctions between L1 and L2 speakers, in the second article five studies from experimental economics and experimental philosophy were utilized. The studies to date have found that L2 speakers made more utilitarian decisions (Costa et al., 2014), engaged in less-prosocial and more free-rider behavior (Urbig et al., 2015), cooperated less given exposure to Anglo culture (Akkermans, Harzing, & van Witteloostuijn, 2010), and rejected more unfair proposals (Oosterbeek, Sloof, & Van De Kuilen, 2004). The implications of these results to the bilingual decision making context indicate that L2 speakers are not necessarily more utilitarian, and give and offer more money, are similarly cooperative, and attribute responsibility to intentional and unintentional actions equally. In total, 1,346 (L1=537; L2=726) subjects participated in the five experiments. Article #3: The third article examined the cognitive differences between L1 and L2 speakers using two experimental designs. In the first, L1 and L2 participants participated in a subitizing experiment in which subjects were presented with 1-12 objects in various arrays. All participants exhibited very similar response patterns. In the second experiment, the Cognitive Reflection Test (Frederick, 2005) was used to elicit rapid and intuitive responses, but in order to answer correctly subjects are generally required to use slower, reflective thinking. Overall, L2 speakers provided more accurate responses than L1 speakers, a benefit for second language speakers. Male respondents answered more questions correctly than female respondents, but female respondents were more likely than male respondents to choose the most intuitive, yet incorrect answer. In total, 574 (L1=295; L2=279) subjects participated in three experiments. Implications: Taken together, this dissertation attempted to identify whether decision-making differences between L1 and L2 speakers appeared using thoroughly-tested experimental designs, and if distinctions appear, then have those distinctions form the basis for new research questions and experiments. The implications of bilingual decision making are found in environments in which both L1 and L2 speakers make consequential decisions, such as in medical decision making, legal decision making, and managerial decision making. Medical decision making is the study of decisions in medical contexts with an eye to improve the health and clinical care of individuals and to assist with health policy development (Medical Decision Making Journal, 2015). Scholars of legal decision making study the psychological and emotional factors of legal decision making made by jurists and jurors (Legal Decision Making Research Lab, University of Nebraska-Lincoln, 2015). Managerial decision making is the study of negotiation, investment, and management (Bazerman & Moore, 2012). What each of these sub-areas of decision making have in common is that they have not specifically addressed whether and how the decisions made by L2 speakers and bilingual speakers may vary as a function of one's first language.