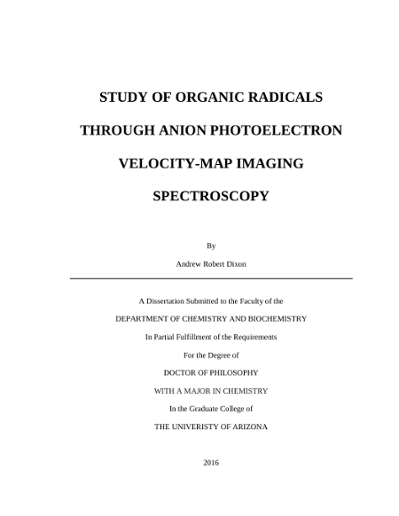 Molecular and cluster anions have been investigated using photoelectron velocity-map imaging spectroscopy to study the nature of electrons in radical species. We report a negative-ion photoelectron imaging study of benzonitrile and several of its hydrated, oxygenated, and homo-molecularly solvated cluster anions. The photodetachment transition from the unsolvated benzonitrile anion to the X̃¹A₁ state of the neutral peaks at 58 ± 5 meV. The electron affinity (EA) of the lowest excited electronic state of benzonitrile, ã³A₁, is determined as 3.41 ± 0.01 eV. The next excited state, the open-shell singlet Ã¹A₁, is found about an electron-volt above the triplet, corresponding to a vertical detachment energy of 4.45 ± 0.01 eV. The step-wise and cumulative solvation energies of benzonitrile anions by several types of species were determined, including homo-molecular solvation by benzonitrile, hydration by 1–3 waters, oxygenation by 1–3 oxygen molecules, and mixed solvation by various combinations of O₂, H₂O, and benzonitrile. Ethylene has been shown to be a degradation product following the 1-e⁻ attachment to ethylene carbonate. As a solvent molecule for (O₂)^(□), our photoelectron imaging study shows a relatively small solvation energy of ≤0.24 eV for the expected 𝜋-𝜋 interaction in the ((O₂)^(□))(C₂H₄) cluster anion. The EA of the O₂(C₂H₄) cluster was measured at 0.69 ± 0.01 eV, while the 𝑋³A″ ← 𝑋²A″ photodetachment transition shows a 1400 ± 100 cm⁻¹ vibrational progression in the 1064 nm spectrum. Negative-ion photoelectron imaging was used to investigate the substituted carbene derivative of fluoroacetonitrile. We report a closed-shell singlet ground state for the cyanofluorocarbene, FCCN, with an adiabatic electron affinity EA = 2.081 ± 0.002 eV and a singlet-triplet gap of ΔEₛ₋ₜ = 0.42 ± 0.04 eV. The open-shell singlet ¹A″ state was also observed experimentally. We find that the experimentally measured ΔEₛ₋ₜ of FCCN agrees well with the general trend of similar carbenes. We report preliminary results on the photoelectron imaging of phenylcarbene, cyanophenylcarbene, and chlorophenylcarbene anions. Triplet phenylcarbene is observed to have an EA of ≤0.83 eV, considerably lower than the previously indirectly-determined value. Transitions to the singlet and triplet ground state of both cyanophenylcarbene and chlorophenylcarbene are observable, though unidentified bands make full assignment difficult. Cyanophenylcarbene is found to have a triplet ground-state, with a tentative EA of 2.04 eV. Chlorophenylcarbene is found to have a singlet ground-state. The phenyl-group is found to favor the singlet state slightly. The cyanofluoromethyl radical, FC(H)CN, was estimated to have an EA of 1.53 ± 0.08 eV, by a combination of experimental and theoretical results.. With similar methodology, we report the adiabatic electron affinity of the cyanobenzyl radical, EA(PhCHCN) = 1.90 ± 0.01 eV, and assign an upper limit of the EA for the chlorobenzyl radical, EA(PhCHCl) ≤ 1.12 eV. These values were used to estimate the C-H bond dissociation energy (BDE)s for these substituted methanes. Fluoroacetonitrile was found to have a BDE of D𝐻₁₉₈ = 90.7 ± 2.8 kcal mol^(□1). The C-H bond dissociation energies at the benzyl-α sites of the phenylmethanes are determined as 80.9 ± 2.3 kcal mol⁻¹ for benzyl nitrile and an upper limit of 84.2 kcal mol⁻¹ for benzyl chloride. These results are discussed in terms of substituent interactions in a simple MO framework and in relation to other similar molecules, including recently reported results for chloroacetonitrile. The 532 nm photoelectron spectrum of glyoxal provides the first direct spectroscopic determination of the adiabatic electron affinity, EA = 1.10(2) eV. This assignment is supported by a Franck-Condon simulation of the experimental spectrum that successfully reproduces the observed spectral features. The vertical detachment energy (VDE) of the glyoxal radical anion is determined as VDE = 1.30(4) eV. The EA of methylglyoxal is determined as ≤0.8 eV based on the signal-to-noise ratio of the 𝑋¹A′←𝑋²A″ transition, with a VDE = 1.28(4) eV. The EA of the a³A″ ← X²A″ and 𝐴¹A″ ← 𝑋²A″ transitions are determined as 3.28(3) eV and 3.614(5) eV respectively. The intrinsically short-lived ethylenedione molecule (OCCO) was observed and investigated using anion photoelectron spectroscopy. The adiabatic electron affinity of its ³Σg^(□) ground state is 1.936(8) eV. The vibrational progression with a 417(15) cm⁻¹ frequency observed within the triplet band corresponds to a trans-bending mode. Several dissociative singlet states are also observed, corresponding to two components of the ¹Δg state and the ¹Σg⁺ state. The experimental results are in agreement with the theory predictions and constitute the first spectroscopic observation and characterization of the elusive ethylenedione molecule. Two glyoxal derivatives related to the ethylenedione anion (OCCO⁻), ethynediolide (HOCCO⁻) and glyoxalide (OHCCO⁻), were studied. These anions provide access to the corresponding neutral reactive intermediates: the HOCCO and OHCCO radicals. In the HOCCO/OHCCO anion photoelectron spectrum, we identify several electronic states of this radical system and determine the adiabatic electron affinity of HOCCO as 1.763(6) eV. This result is compared to the corresponding 1.936(8) eV value for ethylenedione (OCCO). Initial attempts were made to detect and observe the dicyanoacetylene anion, NCCCCN⁻, by photoelectron imaging. While it is believed the experimental design path of H₂⁺ abstraction from fumaronitrile is sound, no spectral signature can be assigned to NCCCCN⁻. Calculations targeting the low-lying transitions from the anion indicate that the molecule should have a significantly positive electron affinity and at least the ground state should be accessible with the currently available laser sources. The cluster ion O₂(N₂O)⁻ of the same nominal mass as NCCCCN⁻ is identified as an interfering ion and ideas have been proposed for resolving this difficulty.