Optical Transfer of the Three-Dimensional Object 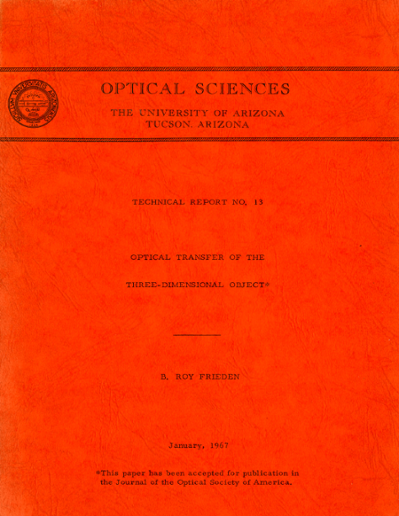 This paper presents a transfer theory for determination of the image space and image spectrum of a three-dimensional object. The theory assumes the existence of volumes of stationarity, called "isotomes," into which the object must be divided. Isotomicity is approximated, over sufficiently small volumes, in the diffraction- limited case. The main development assumes the object to be radiating incoherently; the results are as follows: The image (irradiance) distribution i(x,y,z) is the three-dimensional convolution of the point spread function s(a,ß,y) with the object distribution o(x',y',z'). The image spectrum I(wl,w2'w3) is defined as the three -dimensional Fourier transform of i(x,y,z). It is found that I obeys a transfer theorem, I = F.0, where F(wl,w2,w3) is the three -dimensional Fourier transform of s(ct,ß,y) and 0(wl,w2'w3) is an integral transform of o(x',y',z'). This transfer theorem establishes the value of using F as a criterion of optical design. In the Fraunhofer approximation, F may be represented as a line integral across the pupil U. This shows that F contains a simple pole at col = w2 = O. Nevertheless, all integrals involving F are convergent. The pupil representation for F also shows that F is zero outside a restricted volume E of (wl,w2,w3)- space. Because F is bandwidth- limited, F, I, s, i and T (the optical transfer function) individually obey sampling theorems. These theorems imply that if each point in image space is regarded as an independent degree of freedom, there can be no more than 1/0f4 degrees of freedom/volume in image space. For coherent object radiation, analogous theorems of convolution, transfer, and sampling can be constructed. In addition, the "amplitude" transfer function W(wl,w2,w3), defined as the Fourier transform of the point amplitude distribution u(a,ß,y), is proportional to the pupil func- tion and to S[w3 - (w2 + w2) /2k], where 6 is the Dirac delta function and k = 2r/a. This relation is used to establish sampling theorems for u and for g (the image amplitude) and to express g(x,y,z) as a double integral over U and O.