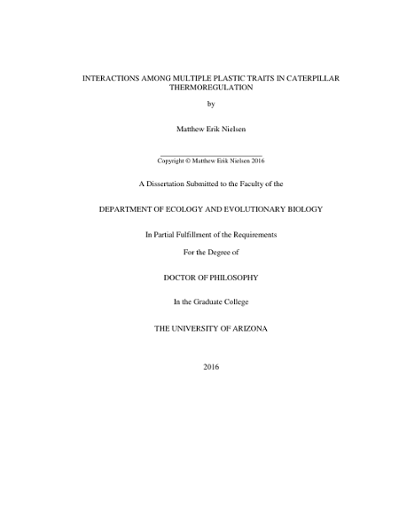 Adaptive phenotypic plasticity is a key mechanism by which organisms deal with variation in many different aspects of their environment. Adaptive plasticity can occur in any trait, from aspects of biochemistry and morphology to behaviors. Because so many different traits can be plastic, organisms often respond plastically to a given change in their environment, such as an increase in temperature, with adaptive changes in multiple traits. Nevertheless, how these different plastic responses interact with each other and evolve together has received little attention. My research addresses these potential interactions among plastic traits and proposes new hypotheses regarding the causes and consequences of these interactions. It does so by focusing on heat avoidance in the caterpillars of Battus philenor (the pipevine swallowtail) which involves two distinct plastic mechanisms. First, the caterpillars can change color when they molt, a form of morphological plasticity in which they develop a red color under high temperatures which cools them by absorbing less solar radiation. Second, when the caterpillars become too hot, they will leave their host to seek cooler thermal refuges, a case of behavior as a form of plasticity. In terms of function, I demonstrated through field research that these two responses to high temperatures are largely redundant. Behavior provides a much stronger and faster response than color change, and red coloration provides little additional cooling when on a refuge. Instead, the primary benefit of color change is that it reduces the use of refuge seeking behavior, allowing the caterpillars to stay on their hosts longer. Using laboratory experiments, I demonstrated that this change in the use of refuge-seeking behavior with color occurs because color changes the cue for the behavior, body temperature, rather having any effect on how the caterpillar responds to that cue. Alternatively, similar experiments on caterpillars of varying sizes show that developmental size change lowers the body temperature at which caterpillars leave their host, demonstrating a change in the response to the cue (although larger caterpillars are also warmer, so both mechanisms are likely relevant for how size changes the expression of behavior). All of my research to this point was conducted on the local population in southern Arizona, which experiences quite high temperatures, but B. philenor is also found in much cooler environments, such as the Appalachian Mountains. Given this variation in their thermal environment, I used common garden experiments to compare the capacity for color change and refuge-seeking among B. philenor caterpillars from across the species range. Both color change and refuge seeking not only occurred in all populations, but also had the same reaction norms, occurring at the same temperatures and to the same degree. This is particularly notable for color change, which is not observed in the wild in northeastern populations, and thus has persisted despite minimal if any use. Overall, I have shown that studies of plasticity need to account for plasticity in different traits as well as the interactions between these forms of plasticity. My research on B. philenor provides a model for how to address these interactions, which future research can extend to additional organisms and environmental circumstances.