Effect of Oxidative Weathering on In Vitro Bioaccessibility of Toxic Substances in Contaminated, Mine Tailings-borne Dusts 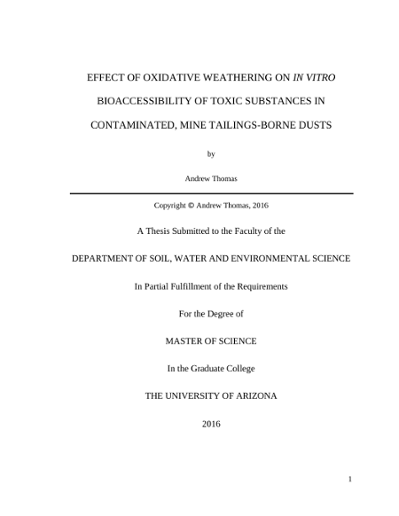 Due to the history of hardrock mining in the southwestern United States, environmental contamination at legacy mine sites is an ongoing problem. Mine wastes, the primary source of contamination, particularly tailings are the uneconomical byproducts of hardrock mining that are generally deposited near a mine. Due to the geochemistry of sulfide orebodies (the source of many valuable metals including Zn, Pb, and Cu), the residues of sulfide ore extraction often have high concentrations of toxic contaminants such as As, Pb and Cd, which are released into the environment due to chemical and mineralogical changes following exposure of the tailings to oxygen and water. The secondary precipitates formed by tailings oxidation are primarily fine particles and due to the dry climate of desert southwestern US, the lack of soil moisture and structure, and the lack of vegetative cover on the tailings surface, contaminated dusts consisting of these secondary precipitates can be generated and spread to nearby communities by wind erosion of the tailings surface. Ingestion or inhalation of these wind-borne dusts can cause health problems resulting from contaminant exposure that depend on the lability of the contaminants in the biofluids that the dust particles come into contact with, a parameter that can be determined using in vitro bioaccessibility assays. This research project concentrated on a tailings pile at the Iron King Mine and Humboldt Smelter Superfund site (IKMHSSS), a disused mine site located in the town of Dewey-Humboldt, AZ. Previous studies at IKHMSSS have revealed that the top meter of the tailings pile encompasses the entirety of a general pyrite (FeS₂) weathering sequence, with the lower levels dominated by pyrite and other minor sulfide minerals (e.g. ZnS, FeAsS, PbS), an intermediate layer dominated by sulfate salts, ferrihydrite and other amorphous Fe(III) oxyhydroxides, and a surface layer dominated by crystalline tertiary precipitates such as jarosite (KFe₃(SO₄)₂(OH)₆). Samples were taken from seven distinct layers differentiated by color, texture and morphological characteristics, and the PM₁₀ fraction of each sample was isolated using a cyclone dust generator. The PM₁₀ samples were then treated with synthetic biofluids designed to mimic physiological conditions present in the human respiratory system and gastrointestinal tract, and the aqueous concentations of As, Fe, Pb and SO₄ were measured at successive time points to determine the chemical kinetics of contaminant release into the synthetic interstitial fluids. The solution data was complemented by x-ray diffraction and x-ray absorption spectroscopy experiments performed at the Stanford Synchrotron Radiation Laboratory. These studies found that the in vitro bioaccessibility of both Pb and As was highest for the unweathered deep tailings samples and lowest for the partially-oxidized transition zone samples. The primary factors found to control bioaccessibility were the presence of labile Fe³⁺ and SO₄²⁻ in the samples, both of which are required to drive the precipitation of secondary minerals capable of incorporating trace elements such as As and Pb into their structure.