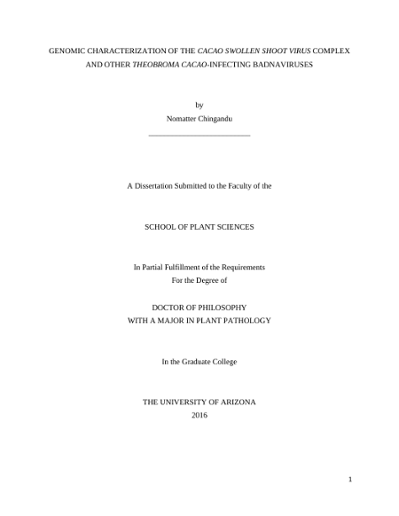 The cacao swollen shoot disease of Theobroma cacao L. (cacao) is caused by Cacao swollen shoot virus (CSSV; genus, Badnavirus, family, Caulimoviridae). The virus is endemic to West Africa, where it poses a serious threat to cocoa production. Despite efforts to control CSSV spread by replacement of infected trees with tolerant cultivars and mealybug vector management, the disease is widespread in West Africa. In Trinidad, leaf mosaic and vein-banding symptoms have been observed in cacao plants in the field since the 1940s, and recently at the International Cocoa Genebank (ICGT), a custodian of cacao germplasm resources. The strains A and B of the suspect Cacao Trinidad virus (CTV) caused the symptoms, and were thought to be related to CSSV, however, viral causality was not demonstrated, until now. To develop molecular detection methods for CSSV in infected plants, polymerase chain reaction (PCR) amplification of eight regions of the CSSV genome was implemented. The PCR results showed variable amplification frequencies of 19 - 42% at each region, for 124 isolates collected in Cote d'Ivoire and Ghana. Pairwise nucleotide (nt) analyses of the eight regions showed 66-99% shared identities, indicating that CSSV isolates exhibit extensive variability with respect to primer design. The results provided preliminary evidence for the existence of a CSSV complex consisting of four divergent species. The full length genome of 14 CSSV isolates from cacao determined using the Illumina HiSeq platform showed 70-99% shared nt identities. The pairwise nt identities placed CSSV sequences into a group of four distinct species, one of which represented a previously undescribed species. Moreover, the full-length genomes grouped phylogenetically with other badnaviruses and revealed two CSSV subclades with three types of genome arrangements; four, five or six open reading frames (ORFs). Predicted functional protein domains were conserved on each ORF. Two distinct, full-length genome sequences were determined using the Illumina HiSeq platform, from DNA isolated from cacao leaves exhibiting distinct symptoms in Trinidad. The sequences were validated by PCR-amplification and sequencing of overlapping viral genome fragments. Pairwise nt analysis indicated that each genome shared 52-62% nt identities with CSSV and other badnaviruses, suggesting that the two are distinct species. Phylogenetic analysis indicated that the two sequences are not strains of the same virus, as supposed, but they represent two previously undescribed species in the genus, Badnavirus, and they have been named Cacao mild mosaic virus (CaMMV) and Cacao yellow-vein-banding virus (CYVBV). Despite sharing the same host and causing similar symptoms in cacao, CSSV, CaMMV, and CYVBV are phylogenetically-distinct species. The discovery of a CSSV species complex and the identification of three new cacao-infecting badnavirus species will support the development of molecular detection tools using the partial and complete genome sequences determined in this study. The ability to develop validated molecular tools for the detection of CSSV and related viruses, CaMMV and CYVBV, in cacao will aid quarantine efforts and safe movement of germplasm from the ICGT in Trinidad to cacao-growing countries, worldwide. Also, molecular diagnostics tools are expected to be useful in efforts underway to develop CSSV-resistant planting material for countries in West Africa, which are currently experiencing continued or new disease outbreaks.