Tracing ancestor rice of Suriname Maroons back to its African origin 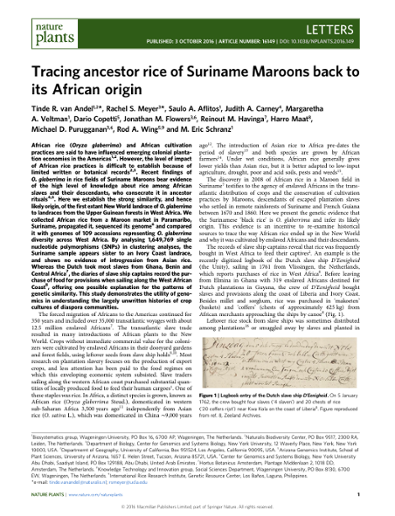 African rice (Oryza glaberrima) and African cultivation practices are said to have influenced emerging colonial plantation economies in the Americas(1,2). However, the level of impact of African rice practices is difficult to establish because of limited written or botanical records(2,3). Recent findings of O. glaberrima in rice fields of Suriname Maroons bear evidence of the high level of knowledge about rice among African slaves and their descendants, who consecrate it in ancestor rituals(4,5). Here we establish the strong similarity, and hence likely origin, of the first extant New World landrace of O. glaberrima to landraces from the Upper Guinean forests in West Africa. We collected African rice from a Maroon market in Paramaribo, Suriname, propagated it, sequenced its genome(6) and compared it with genomes of 109 accessions representing O. glaberrima diversity across West Africa. By analysing 1,649,769 single nucleotide polymorphisms (SNPs) in clustering analyses, the Suriname sample appears sister to an Ivory Coast landrace, and shows no evidence of introgression from Asian rice. Whereas the Dutch took most slaves from Ghana, Benin and Central Africa(7), the diaries of slave ship captains record the purchase of food for provisions when sailing along the West African Coast(8), offering one possible explanation for the patterns of genetic similarity. This study demonstrates the utility of genomics in understanding the largely unwritten histories of crop cultures of diaspora communities.