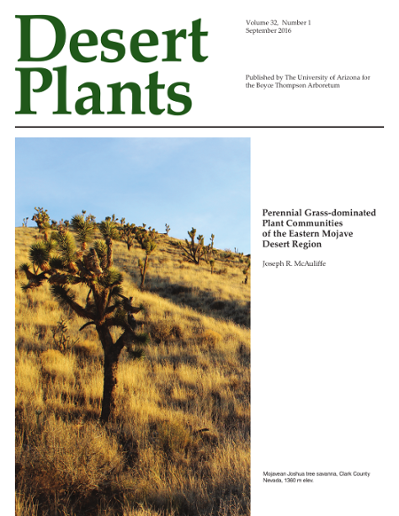 Copyright © Arizona Board of Regents. The University of Arizona.

Desert Plants is published by The University of Arizona for the Boyce Thompson Southwestern Arboretum. For more information about this unique botanical journal, please email the College of Agriculture and Life Sciences Publications Office at pubs@cals.arizona.edu.

Portions of the eastern Mojave Desert region of southeastern California, southern Nevada, and west-central Arizona that receive significant inputs of warm-season precipitation contain large areas dominated by various C4 perennial grasses including Pleuraphis rigida, P. jamesii, Bouteloua eriopoda, and B. gracilis. The lower elevation at which the two Bouteloua species occur rises from east to west in response to diminished precipitation, especially that received during the warm season. Unpredictability of warm-season precipitation also increases from east to west, but these grasses occasionally make use of cool-season precipitation stored in the soil, once temperatures required for the C4 photosynthetic pathway are achieved in late spring, but before the onset of summer monsoonal precipitation. Species distributions vary with elevation, with P. rigida occurring at lower elevations, B. eriopoda and P. jamesii at intermediate elevations, and B. gracilis at higher elevations. Composition of communities containing the latter three species is similar to grassland formations of the cool-temperate grasslands (grama-galleta steppe) of the Colorado Plateau region. Small, less predictable amounts of warm-season precipitation probably impose the greatest limitation to the diversity of C4 grasses in the eastern Mojave Desert region. However, due to warmer minimum winter temperatures, the woody plant and succulent floras associated with perennial grasses in the eastern Mojave region bear greater resemblance to those of the warm-temperate, semi-desert grasslands of west-central Arizona, southeastern Arizona, and the Sonoran and Mojave Deserts. The presence of these woody plant and succulents in perennial grass-dominated communities in the eastern Mojave Desert imparts a structural character similar to that of the warm-temperate semi-arid grasslands of southern Arizona. Although climate (particularly warm-season precipitation) is a first-order determinant of the occurrence of perennial C4 grasses in the eastern Mojave Desert region, geological characteristics that control soil formation and soil hydrological behavior strongly influence composition of communities. The common denominator of sites dominated by grasses is a soil with relatively thick, fine-grained soil horizons that are conducive to exploitation by relatively shallow, diffuse, fibrous root systems of those grasses. Such soils occur in diverse settings, ranging from relatively steep hillslopes underlain by bedrock to gently inclined alluvial fans. In rocky hillslope environments, these kinds of soils are associated with late Pleistocene colluvium deposits in which eolian dust accumulation is principally responsible for forming the thick, fine-grained horizons. Erosion of these soils on hillslopes contributes to hydrological conditions more conducive to taproot systems of woody plants that occupy deeper fractures and joints in bedrock. Similarly, erosional truncation of well-developed soils of alluvial fans and exposure of cemented, relatively impenetrable calcic horizons produce a shift in dominance by perennial grasses to woody plants. In many settings, the presence of relatively dense perennial grass cover plays an essential role in moderating surface flows and inhibiting erosion. Prior to Anglo-American settlement of the region in the late 1800s, occasional wildfires may have fostered dominance of perennial grasses in some of these areas. Since the 1890s, livestock ranching has significantly impacted perennial grass-dominated vegetation. Removal of livestock from portions of the region around 2000, coupled with years of abundant warm-season precipitation, in some cases combined with wildfire, has led to a resurgence of perennial grasses in some areas. Effective management and conservation of these areas require a comprehensive understanding of the composition, occurrence, and ecological functioning of these communities.