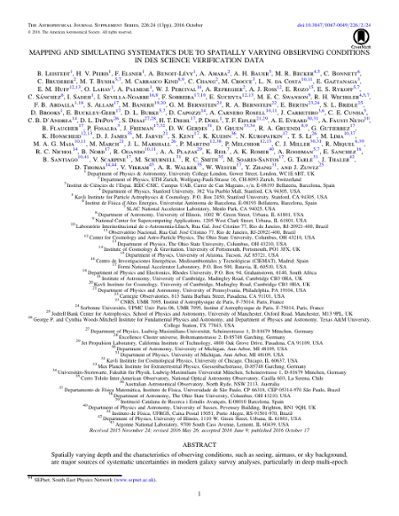 Spatially varying depth and the characteristics of observing conditions, such as seeing, airmass, or sky background, are major sources of systematic uncertainties in modern galaxy survey analyses, particularly in deep multi-epoch surveys. We present a framework to extract and project these sources of systematics onto the sky, and apply it to the Dark Energy Survey (DES) to map the observing conditions of the Science Verification (SV) data. The resulting distributions and maps of sources of systematics are used in several analyses of DES-SV to perform detailed null tests with the data, and also to incorporate systematics in survey simulations. We illustrate the complementary nature of these two approaches by comparing the SV data with BCC-UFig, a synthetic sky catalog generated by forward-modeling of the DES-SV images. We analyze the BCC-UFig simulation to construct galaxy samples mimicking those used in SV galaxy clustering studies. We show that the spatially varying survey depth imprinted in the observed galaxy densities and the redshift distributions of the SV data are successfully reproduced by the simulation and are well-captured by the maps of observing conditions. The combined use of the maps, the SV data, and the BCC-UFig simulation allows us to quantify the impact of spatial systematics on N(z), the redshift distributions inferred using photometric redshifts. We conclude that spatial systematics in the SV data are mainly due to seeing fluctuations and are under control in current clustering and weak-lensing analyses. However, they will need to be carefully characterized in upcoming phases of DES in order to avoid biasing the inferred cosmological results. The framework presented here is relevant to all multi-epoch surveys and will be essential for exploiting future surveys such as the Large Synoptic Survey Telescope, which will require detailed null tests and realistic end-to-end image simulations to correctly interpret the deep, high-cadence observations of the sky.