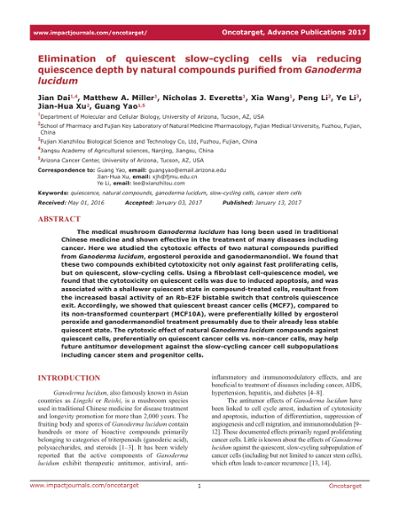 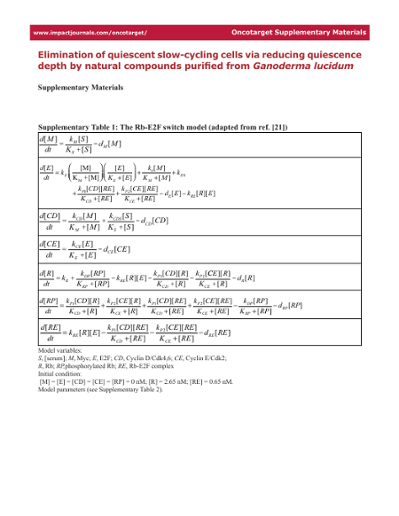 © The Author(s), licensed under a Creative Commons Attribution 3.0 License.

The medical mushroom Ganoderma lucidum has long been used in traditional Chinese medicine and shown effective in the treatment of many diseases including cancer. Here we studied the cytotoxic effects of two natural compounds purified from Ganoderma lucidum, ergosterol peroxide and ganodermanondiol. We found that these two compounds exhibited cytotoxicity not only against fast proliferating cells, but on quiescent, slow-cycling cells. Using a fibroblast cell-quiescence model, we found that the cytotoxicity on quiescent cells was due to induced apoptosis, and was associated with a shallower quiescent state in compound-treated cells, resultant from the increased basal activity of an Rb-E2F bistable switch that controls quiescence exit. Accordingly, we showed that quiescent breast cancer cells (MCF7), compared to its non-transformed counterpart (MCF10A), were preferentially killed by ergosterol peroxide and ganodermanondiol treatment presumably due to their already less stable quiescent state. The cytotoxic effect of natural Ganoderma lucidum compounds against quiescent cells, preferentially on quiescent cancer cells vs. non-cancer cells, may help future antitumor development against the slow-cycling cancer cell subpopulations including cancer stem and progenitor cells.

Except where otherwise noted, this item's license is described as © The Author(s), licensed under a Creative Commons Attribution 3.0 License.