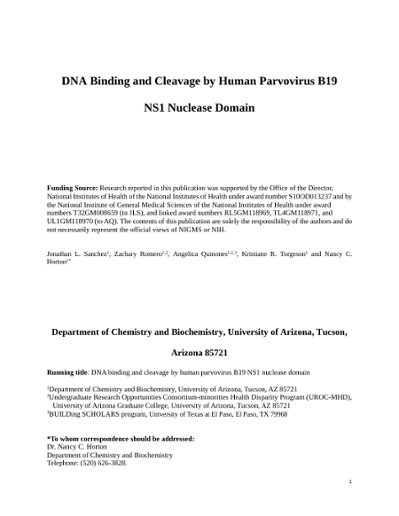 Department of Chemistry and Biochemistry, University of Arizona

Infection with human parvovirus B19 (B19V) has been associated with a myriad of illnesses, including erythema infectiosum (Fifth disease), hydrops fetalis, arthropathy, hepatitis, and cardiomyopathy, and also possibly the triggering of any number of different autoimmune diseases. B19V NS1 is a multidomain protein that plays a critical role in viral replication, with predicted nuclease, helicase, and gene transactivation activities. Herein, we investigate the biochemical activities of the nuclease domain (residues 2-176) of B19V NS1 (NS1-nuc) in sequence-specific DNA binding of the viral origin of replication sequences, as well as those of promoter sequences, including the viral p6 and the human p21, TNF alpha, and IL-6 promoters previously identified in NS1-dependent transcriptional transactivation. NS1-nuc was found to bind with high cooperativity and with multiple (five to seven) copies to the NS1 binding elements (NSBE) found in the viral origin of replication and the overlapping viral p6 promoter DNA sequence. NS1-nuc was also found to bind cooperatively with at least three copies to the GC-rich Spl binding sites of the human p21 gene promoter. Only weak or nonspecific binding of NS1-nuc to the segments of the TNF alpha and IL-6 promoters was found. Cleavage of DNA by NS1-nuc occurred at the expected viral sequence (the terminal resolution site), but only in single-stranded DNA, and NS1-nuc was found to covalently attach to the 5' end of the DNA at the cleavage site. Off-target cleavage by NS1-nuc was also identified.