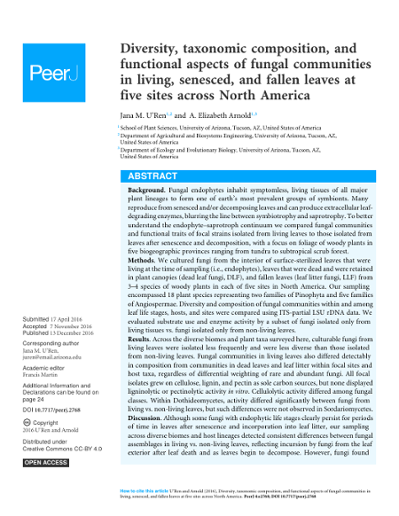 Background. Fungal endophytes inhabit symptomless, living tissues of all major plant lineages to form one of earth's most prevalent groups of symbionts. Many reproduce from senesced and/or decomposing leaves and can produce extracellular leaf degrading enzymes, blurring the line between symbiotrophy and saprotrophy. To better understand the endophyte saprotroph continuum we compared fungal communities and functional traits of focal strains isolated from living leaves to those isolated from leaves after senescence and decomposition, with a focus on foliage of woody plants in five biogeographic provinces ranging from tundra to subtropical scrub forest. Methods. We cultured fungi from the interior of surface-sterilized leaves that were living at the time. of sampling (i.e., dophytes), leaves that were dead and were retained in plant canopies (dead leaf fungi,eDn LF), and fallen. leaves (leaf litter.fungi,LLF) from 3-4 species of woody plants in each of five sites in. North America. Our sampling encompassed 18 plant species. representing. two families of Pinophyta.and five families of Angiospermae. Diversity and composition of fungal communities within and among leaf life stages, hosts, and sites were compared using ITS-partial L SU rDNA data. We evaluated substrate use and enzyme activity by a subset of fungi isolated'onlyfrom living tissues vs. fungi isolated only from non-living leaves. Results Across the diverse biomes and plant taxa surveyed here, culturable fungi living leays were isolated less frequently and were less diverse than those isolated from non-living leaves. Fungal communities in living leaves also differed detectably in composition from communities in dead leaves and leaf litter within focal sites and host taxa, regardless of differential weighting of rare and abundant fungi. All focal isolates grew on cellulose, lignin, and pectin as sole carbon sources, but none displayed igninolytic or pectinolytic activity in vitro. Cellulolytic activity differed among fungal classes. Within Dothideomycetes, activity differed significantly between fungi from living vs. non-living leaves, but such differences were not observed in Sordariomycetes. Discussion. Although some fungi with endophytic life stages clearly persist for periods of time in leaves after senescence and incorporation into leaf litter, our sampling across diverse biomes and host lineages detected consistent differences between fungal assemblages in living vs. non-living leaves, reflecting incursion by fungi from the leaf exterior after leaf death and as leaves begin to decompose. However, fungi found only in living leaves do not differ consistently in cellulolytic activity from those fungi detected thus far only in dead leaves. Future analyses should consider Basidiornycota in addition to the Ascomycota fungi evaluated here, and should explore more dimensions of functional traits and persistence to further define the endophytism-to-saprotrophy continuum.