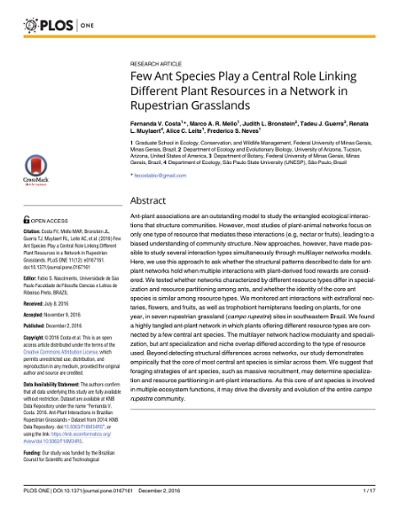 © 2016 Costa et al. This is an open access article distributed under the terms of the Creative Commons Attribution License.

Ant-plant associations are an outstanding model to study the entangled ecological interactions that structure communities. However, most studies of plant-animal networks focus on only one type of resource that mediates these interactions (e.g, nectar or fruits), leading to a biased understanding of community structure. New approaches, however, have made possible to study several interaction types simultaneously through multilayer networks models. Here, we use this approach to ask whether the structural patterns described to date for ant plant networks hold when multiple interactions with plant-derived food rewards are considered. We tested whether networks characterized by different resource types differ in specialization and resource partitioning among ants, and whether the identity of the core ant species is similar among resource types. We monitored ant interactions with extrafloral nectaries, flowers, and fruits, as well as trophobiont hemipterans feeding on plants, for one year, in seven rupestrian grassland (campo rupestre) sites in southeastern Brazil. We found a highly tangled ant-plant network in which plants offering different resource types are connected by a few central ant species. The multilayer network had low modularity and specialization, but ant specialization and niche overlap differed according to the type of resource used. Beyond detecting structural differences across networks, our study demonstrates empirically that the core of most central ant species is similar across them. We suggest that foraging strategies of ant species, such as massive recruitment, may determine specialization and resource partitioning in ant-plant interactions. As this core of ant species is involved in multiple ecosystem functions, it may drive the diversity and evolution of the entire campo rupestre community.