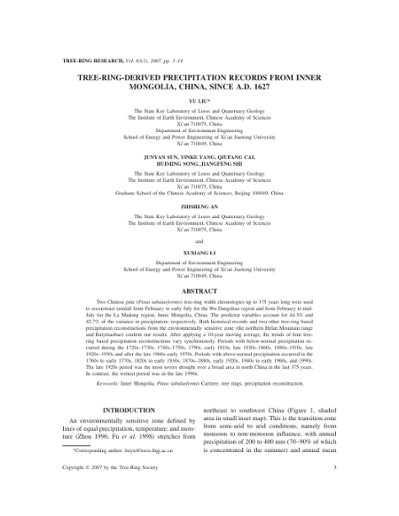 Two Chinese pine (Pinus tabulaeformis) tree-ring width chronologies up to 375 years long were used to reconstruct rainfall from February to early July for the Wu Dangzhao region and from February to mid-July for the La Madong region, Inner Mongolia, China. The predictor variables account for 44.3% and 42.7% of the variance in precipitation, respectively. Both historical records and two other tree-ring based precipitation reconstructions from the environmentally sensitive zone (the northern Helan Mountain range and Baiyinaobao) confirm our results. After applying a 10-year moving average, the trends of four tree-ring based precipitation reconstructions vary synchronously. Periods with below-normal precipitation occurred during the 1720s–1730s, 1740s–1750s, 1790s, early 1810s, late 1830s–1860s, 1880s–1910s, late 1920s–1930s and after the late 1960s–early 1970s. Periods with above-normal precipitation occurred in the 1760s to early 1770s, 1820s to early 1830s, 1870s–1880s, early 1920s, 1940s to early 1960s, and 1990s. The late 1920s period was the most severe drought over a broad area in north China in the last 375 years. In contrast, the wettest period was in the late 1990s.