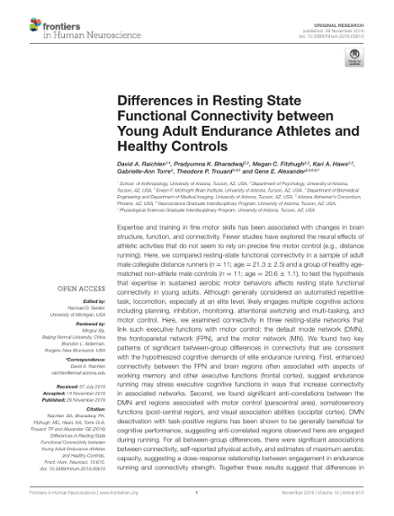 © 2016 Raichlen, Bharadwaj, Fitzhugh, Haws, Torre, Trouard and Alexander. This is an open-access article distributed under the terms of the Creative Commons Attribution License (CC BY).

Expertise and training in fine motor skills has been associated with changes in brain structure, function, and connectivity. Fewer studies have explored the neural effects of athletic activities that do not seem to rely on precise fine motor control (e.g., distance running). Here, we compared resting-state functional connectivity in a sample of adult male collegiate distance runners (n = 11; age = 21.3 +/- 2.5) and a group of healthy age matched non-athlete male controls (n = 11; age = 20.6 +/- 1.1), to test the hypothesis that expertise in sustained aerobic motor behaviors affects resting state functional connectivity in young adults. Although generally considered an automated repetitive task, locomotion, especially at an elite level, likely engages multiple cognitive actions including planning, inhibition, monitoring, attentional switching and multi-tasking, and motor control. Here, we examined connectivity in three resting-state networks that link such executive functions with motor control: the default mode network (DMN), the frontoparietal network (FPN), and the motor network (MN). We found two key patterns of significant between-group differences in connectivity that are consistent with the hypothesized cognitive demands of elite endurance running. First, enhanced connectivity between the FPN and brain regions often associated with aspects of working memory and other executive functions (frontal cortex), suggest endurance running may stress executive cognitive functions in ways that increase connectivity in associated networks. Second, we found significant anti-correlations between the DMN and regions associated with motor control (paracentral area), somatosensory functions (post-central region), and visual association abilities (occipital cortex). DMN deactivation with task-positive regions has been shown to be generally beneficial for cognitive performance, suggesting anti-correlated regions observed here are engaged during running. For all between-group differences, there were significant associations between connectivity, self-reported physical activity, and estimates of maximum aerobic capacity, suggesting a dose-response relationship between engagement in endurance running and connectivity strength. Together these results suggest that differences in experience with endurance running are associated with differences in functional brain connectivity. High intensity aerobic activity that requires sustained, repetitive locomotor and navigational skills may stress cognitive domains in ways that lead to altered brain connectivity, which in turn has implications for understanding the beneficial role of exercise for brain and cognitive function over the lifespan.