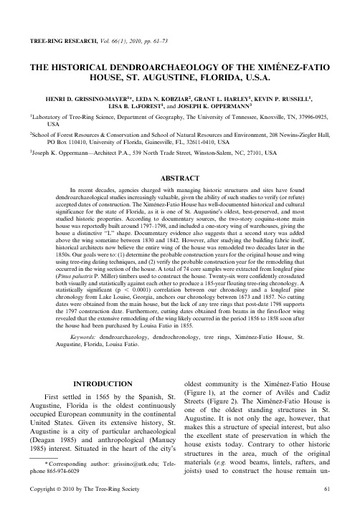 Laboratory of Tree-Ring Science, Department of Geography, The University of Tennessee
School of Forest Resources & Conservation and School of Natural Resources and Environment, University of Florida
Joseph K. Oppermann—Architect

In recent decades, agencies charged with managing historic structures and sites have found dendroarchaeological studies increasingly valuable, given the ability of such studies to verify (or refute) accepted dates of construction. The Ximénez-Fatio House has well-documented historical and cultural significance for the state of Florida, as it is one of St. Augustine’s oldest, best-preserved, and most studied historic properties. According to documentary sources, the two-story coquina-stone main house was reportedly built around 1797–1798, and included a one-story wing of warehouses, giving the house a distinctive ‘‘L’’ shape. Documentary evidence also suggests that a second story was added above the wing sometime between 1830 and 1842. However, after studying the building fabric itself, historical architects now believe the entire wing of the house was remodeled two decades later in the 1850s. Our goals were to: (1) determine the probable construction years for the original house and wing using tree-ring dating techniques, and (2) verify the probable construction year for the remodeling that occurred in the wing section of the house. A total of 74 core samples were extracted from longleaf pine (Pinus palustris P. Miller) timbers used to construct the house. Twenty-six were confidently crossdated both visually and statistically against each other to produce a 185-year floating tree-ring chronology. A statistically significant (p < 0.0001) correlation between our chronology and a longleaf pine chronology from Lake Louise, Georgia, anchors our chronology between 1673 and 1857. No cutting dates were obtained from the main house, but the lack of any tree rings that post-date 1798 supports the 1797 construction date. Furthermore, cutting dates obtained from beams in the first-floor wing revealed that the extensive remodeling of the wing likely occurred in the period 1856 to 1858 soon after the house had been purchased by Louisa Fatio in 1855.